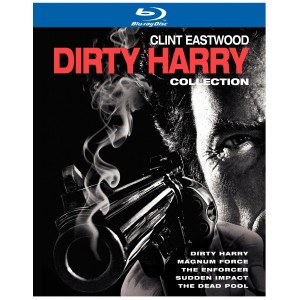 It has been a while since we have done a Geek Deal of the Day.  Well I have a few today for you.  I will start off with a BADASS collection. The Dirty Harry collection.  This awesome five movie set is currently on sale for 55% off bringing it below $30.00.  That’s less than $6.00 a film.  AMAZING.  Take advantage.

DIRTY HARRY Streetwise San Francisco police detective Harry Callahan will nail the serial killer Scorpio… one way or the other… no matter what “the system” prescribes. Don Siegel directs one of the best police thrillers ever made. MAGNUM FORCE Sharpshooting rookie motorcycle cops have turned vigilante, eliminating crooks the courts can’t touch – thereby venturing into Harry’s cross-hairs. Written by future directors John Milius and Michael Cimino. THE ENFORCER When terrorists rob an arms warehouse and go on a bloody extortion spree, city leaders seek out Callahan, who’s now teamed with a lady partner (Tyne Daly) with two jobs: tracking down the terrorists – and winning Harry’s confidence. SUDDEN IMPACT On an out-of-town assignment, Harry tracks a traumatized rape victim (Sondra Locke) coldly gunning down her bygone attackers. Fueled by the line that became a national catchphrase: “Go ahead. Make my day.” THE DEAD POOL Fame isn’t Callahan’s style. He’d rather not be lumped in with a rocker, a film critic and a talk-show host. They’re slain celebrities named in a mysterious betting pool. And Harry just joined the list.