Bryan Says ‘Moneyball’ Knocks It Out Of The Park!!! 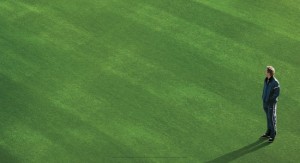 ‘Moneyball’ is one of the best written films of the year.  The cast and crew of this film hit a home run with this.  The acting, writing, filmmaking is all top notch here.  is a book by Michael Lewis, written in 2003 about the Oakland Athletics baseball team and Billy Beane which was there general manager. The book is about how the Oakland A’s used a math formula to construct a winning baseball team of “back up” ball players.  The reason was that the Oakland A’s had a strong disadvantage from anyone else in the league because of their financial situation.  By using this formula, the Oakland A’s won 20 straight games in a row breaking all records in baseball history.  This is a true story.

So the basic plot of the film has us follow Billy Beane (Brad Pitt) who is a failed baseball player who ends up as the general manager of the Oakland A’s later in life.  Of course, the A’s don’t succeed in winning games a whole lot and Billy Beane is looking to change up they way the club does things.  Add insult to injury after a poor season, the three top players of the A’s leave the team for more money in other cities.  After a few days of trying to buy new players and trade with other teams, Beane ends up at the Cleveland Indians ball club and meets Peter Brand who is a low level analyst for the Cleveland Indians.  Brand tells Beane about this math formula for picking the best baseball team which comes off as very unorthodox.  Beane believes in this system and believes in Brand so Beane hires him as the assistant general manager of the Oakland A’s.  Not one scout or employee really believes in this new system for creating the perfect baseball team.  Not even the manager of the A’s, Art Howe, played to perfection by Philip Seymour Hoffman.

I wouldn’t be surprised if Hoffman got an Oscar nomination for his role in ‘Moneyball’.  From here on out, we see the A’s season play out and how effective the new math formula is.  In addition to the ball season,  we see Beane struggle with being a single father and just battling his inner demons with his failure from when he was younger.  Brad Pitt shines throughout this whole film.  His emotion punches you in the gut and really takes you deep into his psyche through every win and loss.  You really root for his success.  Jonah Hill is amazing in this film.  It’s a far reach from his usual hilarious comedies.  He plays a dramatic actor very well. He’s extremely likable in this film.  Of course there is some subtle signature “Jonah Hill” awkward moments and it plays out perfectly.  I love Jonah in his silly vulgar comedies, but I can’t wait to see the more dramatic roles he takes on.  And like I said before, Philip Seymour Hoffman as the manager deserves an Oscar nomination.  Hoffman really is one of the greatest character actors EVER.  On a side note, Demetri Martin was originally cast as Jonah Hill’s role, but was recast with Jonah when Soderbergh dropped out of directing to pursue ‘Contagion’ and  Bennett Miller.

‘Moneyball’ went through a lot of changes and was put on a hold shelf for a while.  But Aaron Sorkin came into re-write the script and ultimately Steve Zaillian came into polish Sorkin’s draft.  But really, Sorkin is heard throughout.  ‘Moneyball’ is one of the best written films of the year.  If you close your eyes and listen to the dialogue you will know everything that is happening and it just gets you excited to be in that theatre.  It is spectacular on all levels.  I have no doubt ‘Moneyball’ will get nominated for Best screenplay.

Overall, ‘Moneyball’ might be the ultimate and most brilliant underdog story ever told.  And it is a true story.  How great is that?  You definitely don’t have to be a baseball fan or know baseball to enjoy and like this film.  You will without a doubt fall in love with everything that is ‘Moneyball’.  From the story about a guy and his team, his success and failures, the acting, the story, and the writing.  It is all here and is all a magnificent achievement in filmmaking.  Go see ‘Moneyball’ as soon as possible.  You won’t be disappointed.