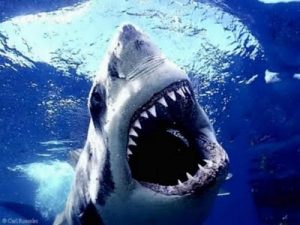 I am a huge fan of Brett Easton Ellis.  His novels are amazing.  He wrote ‘American Psycho’, ‘Less Than Zero’, ‘Rules of Attraction’, and ‘Lunar Park’ to name a few.  He is now teaming up with director Paul Schrader to make a film called ‘Bait’ which “follows a young man itching to take his revenge against the wealthy.  The man, who works at a posh beach club, angles his way on to a yacht filled with the obnoxious elite, commandeering it into waters filled with the finned man-eaters.”

So not exactly like ‘Jaws’.  More like ‘Psycho’ meets ‘Jaws’.  Schrader wrote ‘Taxi Driver’ and ‘Raging Bull’ as well as directed the 80’s film ‘Cat People’, ‘American Gigolo’, and ‘Dominion: Prequel to the Exorcist’.  So he has done the horror genre before.  They are looking to cast immediately and start production in November in Puerto Rico.

This sounds pretty good.  Some great talent behind this film.  Hopefully it turns out worthwhile.