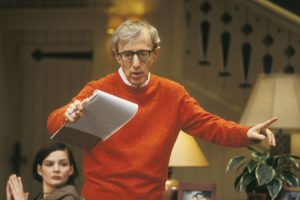 PBS will debut  a two-part American Masters documentary airing November 20 and 21, tentatively titled ‘Seriously Funny: The Comic Art of Woody’ Allen.  “The two-part documentary, which includes footage from six sit-down interviews and visits to film sets, includes other footage: A 1986 interview Allen shot with his mother, in which she confides he’d have been “softer” if only she’d been less strict; a visit to his childhood home in Brooklyn; and clips from his early TV exposure as a stand-up comedian.”

I will definitely be setting my dvr to record this.  Allen is one of the most prolific filmmakers of our time.  It’s sad he is such a recluse when it come sot being interviewed or doing commentaries on his films.  So you must imagine how excited I am to get a two part two hour documentary on the hilarious Woody Allen.  More updates and a possible trailer soon.