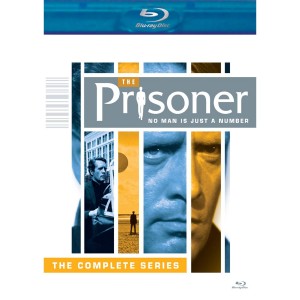 From now until Sunday, ‘The Prisoner’ Complete series is on sale for 75% off.  The set normally goes fro $100.00.  It is now going for $25.00.  And it’s on Blu-Ray.  “Since its CBS debut in the summer of 1968, the masterful British TV series THE PRISONER has captivated American audiences. Now A&E presents a definitive aficionado’s edition of the cult classic which is considered one of the most innovative TV series ever filmed, for the first time in breathtaking Blu-Ray. Fully restored from the original film elements with newly remixed 5.1 surround sound and featuring hours of bonus material never released in North America, THE PRISONER: BLU-RAY EDITION is a fitting tribute to the creative vision of the late Executive Producer and Star Patrick McGoohan.”

“After resigning from a top-secret position, a man (McGoohan) is abducted and spirited from his London home to a mysterious place known only as ‘The Village.’ Village Residents, known only by numbers, are held captive because each possesses valuable knowledge. The Prisoner, now known as Number Six, battles to protect his mind — and his humanity — while struggling to discover the identity of Number One and escape captivity.”

All 17 episodes in newly remixed 5.1 surround sound (in addition to the original mono tracks)

“Don’t Knock Yourself Out”: Feature-length documentary chronicling the production of THE PRISONER, told by those involved in its creation

Two brand-new featurettes: “The Pink Prisoner” and “You Make Sure It Fits!”

Promo for AMC’s THE PRISONER Miniseries

Original edit of “The Chimes of Big Ben”

Trailers for all episodes

Image archive with over 1200 stills