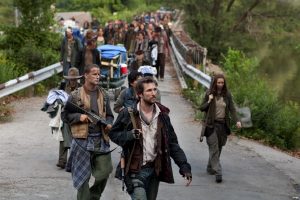 Well the Spielberg produced alien invasion show ‘Falling Skies’ has been doing so well, that TNT ordered a second season already.  The two hour premiere had over eight million viewers and the two episodes after that has had an average of 6.4 million total viewers.  Plus it has been getting strong numbers and great reception from the overseas markets.

So naturally TNT ordered ten episodes for their second season thus far and most likely will air in the summer of 2012.  Not bad TNT.  Not bad at all.  I have been watching this show, and so far I am enjoying it.  It isn’t my favorite show, but it is a solid and strong story so far.  It reminds me a lot of AMC’s ‘Walking Dead’, but with aliens instead of zombies.  I’m curious to see where the show goes, and with it being TNT, how far they will push the envelope.