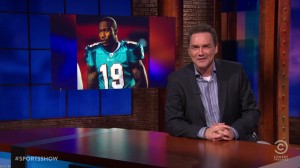 The show was averaging in over 1.1 million viewers for its Tuesday late time slot.  That is actually good.  Macdonald said: “that he had not been “officially” informed of the bad news, noting, “A Minute with Stan Hooper is still officially on hiatus,” a reference to his short-lived 2003 Fox sitcom. He also said that he was open to hosting a similar-style program (“I like doing a funny show where I don’t have to act and fall in love with a girl”) and talked up “an Internet campaign to save the show, almost like they do with shows about witches and vampires and aliens from outer space…. Maybe I’ll call [the network] and ask them to bring it back. I’ll say, ‘Just bring it back. How much could it hurt television, really?’”

I hope another network picks him up.  This show was great.  Bad form Comedy Central.  Bad form.

Your thoughts?  Via EW.