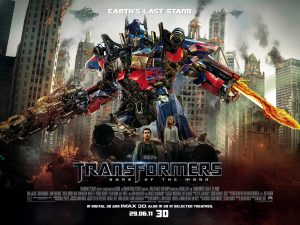 So another year has come and we have another Transformers film.  Oh joy.  It seems like our own FedMex enjoyed the third installment quite a bit.  Enough so that he might even see it again.  Without further stalling,  here is ‘Transformers 3: Dark of the Moon’ through the eyes of FedMex.  Enjoy.

“As I write this, I decided I would be careful to avoid any spoilers, and all of a sudden it dawned upon me that, wait a minute, this is Transformers 3….by Michael Bay……..he doesn’t believe in plots.  So with that stated, SPOILER ALERT!!! Shit gets blown up, a lot!  Michael Bay continues with his tradition of making movies by, that’s right, having shit get blown up, a lot.  I’ve come to the conclusion that Bay is actually a pyromaniac that never learned to read, and I’m totally OK with that.

That stated, Michael Bay, if you’re reading this (which he isn’t), please, embrace the fact that you can’t read.  We the people of your audience are not turning to you for plot.  You can blow stuff up better than Roland Emmerich and we all love you for it.  So for the love of God, when you know that you’re just writing explosion scenes, and any script you attach to the film is a complete afterthought where you’re just trying to get those ridiculously huge Hollywood names (and congratulations to you for being able to score that all star line-up who definitely brought a lot of talent to a script that really gave them nowhere to put it) to have a line or two in your orgy of destruction, do us a favor, skip it.  Writing is not your strong suit my friend, but we love you anyway. 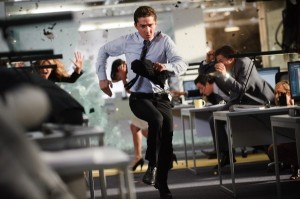 Now that the air is clear, this was definitely a rise above the previous installment of the series.  While Transformers 2 gave us a weak plot and a couple of racist robots, Transformers 3 gives us an equally weak plot with a couple of slightly racist and more European robots, an unnecessarily long run time, a good backdrop for a plot that makes you stop caring eventually, but it will ultimately draw you back in like the dirty whores that we are by giving us more explosions than can be handled in just two dimensions!

Seriously, the action sequences make this movie worth every cent in the admission price.  As I’ve made abundantly clear, Michael Bay Makes Things Go Boom.  This is what the man does, and this is his Mona Lisa of BOOM!  And though I’ve also made abundantly clear that I cared little for the plot, that doesn’t mean that the film is an emotionless shell.  I was actually moved by the action sequences.  Some are simply breathtaking, awe inspiring in their magnitude.  Others are just fascinatingly exhilarating and will keep your eyes moving a mile a minute to try to catch up.  And, yes, some of the action scenes are brutally emotional, almost painful to watch, heart wrenching sequences that are, in their own way, beautiful in their chaos.

So in spite of all the characters being incidental to an excuse to have robots fight for our future, Bay still captured me with some of the most brilliant special effects I’ve ever seen.  I will almost undoubtedly be watching this in theaters again, but maybe this time I’ll just come in about 30-45 minutes in lieu of not being able to fast forward a movie at the theater.”