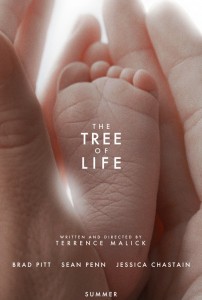 I want you all to welcome the newest addition to the wonderful world of Boomstick.  He hails from a great land in a far off galaxy and has come to Earth for the time being to give us his insight on everything film.  He enjoys the silent film era and is well versed in all things Kubrick, Keaton, and Kirk. So let’s all say hello to Ben K.  Here is his first review for the site on Terrence Malick’s important and beautiful ‘Tree of Life’.  Enjoy.

Terrence Malick, the enigmatic director behind films such as Badlands (1973), Days of Heaven (1978), and The Thin Red Line (1998), has finally released what may be his magnum opus. The Tree of Life, following a twenty year gestation period in Malick’s mind, has arrived. “Worth the wait” would be an understatement; it’s the best movie released in 2011 thus far. For me it is the finest American film since No Country For Old Men back in 2007.

I have seen it twice now, and believe me, twice doesn’t cut it. Very few films have the power to change with us, but with The Tree of Life, I’m already looking forward to getting reacquainted five years down the road. Some will claim the movie is disjointed, people may walk out of the theater annoyed, there may be laughter and general confusion when the credits roll. I’m reminded of Stanley Kubrick’s brilliant 2001: A Space Odyssey, which experienced these same reactions back in 1968. Mark my words, by the time everything else released in 2011 is long forgotten, The Tree of Life will be considered a classic.

What we have here is a deceptively simple story, inhabited by archetypal characters, moving back and forth through time and space. Sound pretentious?  Well, it isn’t, but I won’t argue the film has just about “everything” on its mind. With the considerable aid of production designer, Jack Fisk, and cinematographer, Emmanuel Lubezki, Terrence Malick has crafted a dreamlike landscape; the stuff of memories, half remembered and once forgotten. This is the only proper canvas upon which he can  paint these ideas.

The main character, Jack (Sean Penn as an adult, Hunter McCracken as a youth), is a depressed architect in ultra-modern surroundings who recalls a childhood summer spent in Waco, Texas. He remembers his father (Brad Pitt), the competitive disciplinarian, and his mother (Jessica Chastain), the gentle nurturer. The parents clearly represent “nature” and “grace”, Malick’s name for the two opposing forces in the universe. Ideally, he argues, we should strive to attain a balance between the two. One can not help but notice the father is hard on his children, but once he leaves on a business trip, young Jack goes on an adolescent rampage that the mother seems ill-equipped to stop.

These sections of the film work as memories often do, jump cutting from one to the next, speaking through images rather than dialogue. With his incredible expressions and realistic delivery, Hunter McCracken gives what I feel to be the best performance in the picture. Pitt and Chastain are terrific as well. The film has already won the Palme d’Or (highest award) at the Cannes Film Festival, and I hope it’s a sign of many honors to come for all involved.

However, though the acting is heartfelt and spot-on, this is Terrence Malick’s film. His fingerprints are all over The Tree of Life; his unique style obvious from the first frame to the last. A devout Episcopalian, Malick begins with a quote from the Book of Job: “Where were you when I laid the foundations of the earth?” Job, a good man who nonetheless endured incredible suffering, had the audacity to ask God, “Why?” God went on to put Job in his place, humbling him, insisting that he knew nothing of what it meant to be the ruler of the universe. He revealed just how tiny Job was in the infinite scope of existence.

With this quote in mind, we are introduced to Pitt and Chastain, who have lost their middle son at the age of nineteen. We don’t know the cause, and little does it matter. We see these two parents consumed by grief, filled with doubt and regret. The father questions his actions, was he too severe? He laments the fact that it is too late to make amends. The mother finds herself questioning God, as Job did. “Where were you?” she asks.

At this moment the screen goes dark, and one of the finest sequences in recent film history begins. As the score turns to Preisner’s “Lacrimosa”, we witness the birth…of everything. The universe itself. A celestial tapestry of beautiful nebulae, planets, stars; then we see the young earth, a primal landscape of shifting masses, water, and fire. Soon, there are the first signs of life, a lovely view of jellyfish, sharks, and yes, dinosaurs. This cycle of life (birth, growth, death, and in the case of the dinosaurs, extinction), of nature and grace, makes the birth of the universe feel not too far removed from the birth of a child, and that is where we end up again. With the birth of Jack, our main character, in the 1950’s.

Following another fine montage where all three babies are born and become young boys, the focus turns to these children growing up under two very opposed parental (and cosmic) influences. Even the tiniest scenes add to this conflict; notice the way the mother playfully wakes her children with ice cubes, while the father storms into the room and rips their bed sheets off. A rivalry of sorts begins between Jack and the middle brother, whom the father seems to favor. The middle brother plays music, like his father, and paints pictures. Jack, on the other hand, can’t seem to get on his father’s good side.

There is a scene in an ancient riverbed during the “Creation” sequence where a dinosaur spares the life of a weaker one after stomping on its head. We see this river again, filled with water now, when young Jack decides to shoot his brother in the finger with a BB gun. Later, he apologizes. The way these two scenes mirror each other is quite lovely, and The Tree of Life is filled with moments like that. Many were missed by me on the first viewing, which is why this film must be seen multiple times. There is simply no other option should one wish to access all its riches.

I could go on and on about this magical, reflective motion picture. It is a true work of art. Obviously it is easier (and lazier) to grab the large tub of popcorn, the gigantic soda, and the King Size candy bar before settling into typical summer fare, like Pirates of the Caribbean, Thor, or X-Men. The Tree of Life is more ambitious than all of them put together, and a hell of a lot more thoughtful. It should probably be playing on a loop at the Vatican Museums instead of local multiplexes.