Zach Braff Is Off To See The Wizard, The Wonderful Wizard Of Oz!?!?!? 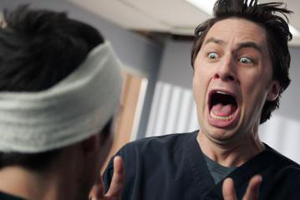 Actor Zach Braff is in final negotiations to be added to the cast of ‘Oz: The Great and Powerful’ directed by Sam Raimi of ‘Army of Darkness’ fame.  Braff will play the role of Frank, the loyal but under-appreciated assistant to the great and powerful Oz played by James Franco.

“Mila Kunis will play the witch Theodora, Michelle Williams will play Glinda and Rachel Weisz will play Evanora.”    Raimi and Disney will release ‘Oz’ in March of 2013.  Yes it’s a ways off, but I think this is shaping up to be quite cool.  I wonder if Raimi’s classic car will make it in to the film or Bruce Campbell will make a cameo.

But one thing is for sure, Raimi is one hell of a versatile director and Braff will definitely add a great comedic element to the film.  I’m psuched to see a Raimi inspired ‘Wizard of Oz’.  How about you?