“This Is Not Nam, This Is A Blu-Ray. There Are Rules”!!! ‘The Big Lebowski’ Limited Edition Blu-ray Announced and Detailed!!! 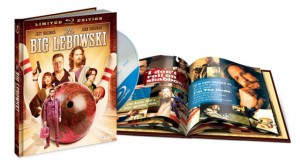 Finally….The Dude and Walter and Donny are getting the proper treatment this August when they get released in ‘The Big Lebowski’ in a limited Blu-ray digibook release.  The blu-ray will be released August 16th.

“Since its creation by Ethan and Joel Coen in 1998, ‘The Big Lebowski’ has transformed from a fan favorite into one of Hollywood’s most celebrated cultural phenomenons,” said Craig Kornblau, President of Universal Studios Home Entertainment. “This spectacular new Limited Edition Blu-ray™ combines the most extensive behind-the-scenes materials to date with the latest Blu-ray™ technology, giving devoted fans and newcomers alike a chance to experience the brilliant all-star cast, outrageous storyline and unforgettable quotes like never before.”

Its now iconic characters and instantly recognizable dialogue have made ‘The Big Lebowski’ “the number-one cult film of all time,” according to The Boston Globe. Since its release, the Coen Brothers’ affectionately addled riff on film noir has snowballed in popularity, becoming “an undeniable pop-cult force” and even, for many, “a way of life,” in the words of the Los Angeles Times. “A masterpiece of anti-storytelling” according to Entertainment Weekly, ‘The Big Lebowski’ has become a cultural touchstone for fans around the world.

The Blu-ray will feature 1080p video, a DTS-HD Master Audio 5.1 soundtrack, and supplements will include: Jeff Bridges Photo Book: Exclusive shots taken on the set of The Big Lebowski by Jeff Bridges himself; The Dude’s Life: Jeff Bridges, John Goodman, Julianne Moore, Steve Buscemi and John Turturro take a look back at their performances and their delivery of the Coen Brothers’ dialogue that became classic movie lines; The Dude Abides- The Big Lebowski Ten Years Later: A conversation with the cast about the film’s cult classic status; Flying Carpets and Bowling Pin Dreams- The Dream Sequences of the Dude: Featurette on the making of the surreal sequences in the film; The Making of The Big Lebowski; The Lebowski Fest- An Achiever’s Story: An in-depth look at the popular Lebowski Festival, formed by the legion of fans in honor of the film; An Introduction: Featuring Mortimer Young; Photo Gallery; and an Interactive Map.

New material includes: Scene Companion: A picture in picture mode that features cast and crew interviews, behind-the-scenes footage and more during key scenes; Mark It Dude: On-screen counter that keeps track of all the “F-Bombs”, “Dudes” and “Dude-isms” in the film; The Music of The Big Lebowski: Instantly identifies the songs heard while watching the film, and allows the creation of custom playlists; Worthy Adversaries- What’s My Line Trivia: Trivia that tests your Lebowski knowledge by finishing lines of dialogue during the film. Play as Walter or The Dude or in two-player mode against friends; U-CONTROL; pocket BLU; Mobile-To-Go; uHEAR; and BD-LIVE.

Available for a limited time with an all-new 28-page companion book featuring an exclusive interview with Jeff Dowd – the real-life inspiration for The Dude – Jeff Bridges’ personal, on-set photography, a film timeline, trivia and much more, ‘The Big Lebowski’ Limited Edition Blu-ray™ is a must-own addition to any collection.“

So sadly there isn’t Coen Bros. commentary, but the “fuck” counter is awesome, and the reunion interviews will be a blast.  I owned the HD-DVD version all those years ago.  Poor HD-DVD.  Moment of silence.  Since then I have only watched the special edition DVD versionand have been dying for another hi-def version with new extras of this film.  I mean, this might be one of the biggest cult film I think to ever come out, next to Rocky Horror.  It’s about time it got the blu-ray treatment.  I can’t wait.

One thought on ““This Is Not Nam, This Is A Blu-Ray. There Are Rules”!!! ‘The Big Lebowski’ Limited Edition Blu-ray Announced and Detailed!!!”