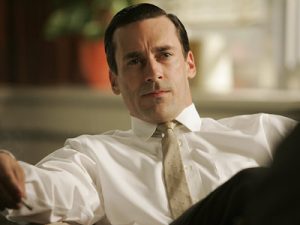 Actor Jon Hamm who play leading man, Don Draper in the amazing AMC series ‘Mad Men’ will not only be in front of the camera for season five, but will also be behind the camera directing at least the season five opener.  This will mark Hamm’s directorial debut.

This is badass.  I think John will do an amazing job, and I wonder if this will lead to future feature films directed by him as well.  Hamm says: “The wheels have officially been set in motion to make that happen.  It’s a very exciting challenge that I’m looking forward to with a mixture of utter fear and excitement.”

The production of season five will start in August of this year with a March 2012 premiere.  Wow.  Way far off, but this is cool news nonetheless.  John Slattery directed an episode of ‘Mad Men’ last season which Slattery plays Roger Sterling.

Looking forward to this.