Get Ready For A Dinosaurs VS. Aliens Film!!! 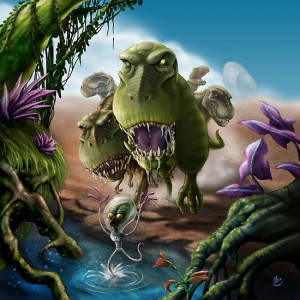 Freddy vs. Jason.  Cowboys vs. Aliens.  Predator vs. Alien.  Lincoln vs. Vampires.  Dahmer vs. Gacy.  It was only a matter a time before we got a Dinosaurs vs. Aliens film.  Director Barry Sonnenfeld (Men In Black films) is in production of the problem riddled production of Men In Black 3 but after that is wrapped his is looking to make a Dinosaurs and Alien battle film.  And why not??  Everyone else is on the bandwagon.

Currently Sonnenfeld is in heavy talks with a  publishing company and film studio to make a comic book/graphic novel and feature film called Dominion: Dinosaurs Versus Aliens with comic writer Grant Morrisson.  Sonnenfeld has found huge success with his films in the Alien genre and he has stated that he has always been a huge fan of Dinosaurs since he was little, so  why not combine the two.

The film will follow an alien invasion and attack on life and Earth while the Dinosaurs are the only ones really who can defend it and who seem to harbor a very high intellect than anyone previous thought.    The graphic novel will be available later on in the year.

I’m very skeptical about this.  It seems like this will be more of a Special FX film more than about story and character.  This usually makes a movie not so great, but who knows.  This has Spielberg written all over it.  I wonder if he will produce or be involved somehow.

Well I can expect at least one dinosaur this summer with Terrence Malick’s “Tree of Life”.

Read the whole story on Deadline.