This release of Abbott and Costello Meet Captain Kidd is just outstanding.  Over the years Abbott and Costello were on their adventures they managed to meet The Mummy, Frankenstein, and The Invisible Man ant not mention when they went to the planet Mars.  I think this particular film is one that fans and really all of us have been waiting for.  It’s one of the ultimate rare “grails” to the Abbott and Costello universe.  One of the many reasons being is that it stars Charles Laughton paying Captain Kidd which is just genius.

It is amazing to see Laughton playing this type of character because was well known for playing very “straight” and serious roles.  And fans of Laughton were just desperately wanting to see him play a foolish and hilarious pirate Captain.  The results are magnificent and brilliant.  And of course Bud and Lou are gold as always.

Well I can say very proudly that this version is the best version of the film thus far.  This disc has been remastered and is in 1.33:1 format which is full-screen.  The sound is pretty decent as well.  I mean you’re not going to get wide-screen or 5.1 super sound here.  This film is not in hi-def, but it hasn’t been mastered for high definition yet.  This is your simple DVD release.  A release of a film from the early 50’s.  Yes it has grain and pops, but I think for being a film that is almost sixty years old, this looks pretty amazing.  Like I said, it is the best I have ever seen the film thus far. 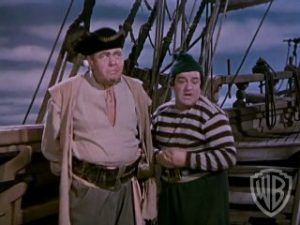 I want to praise the Warner Archive for releasing and remastering this long lost gem of a film.  I really think this is a good sign to come in the form of maybe some bluray sets of old classics like an Abbott and Costello bluray set.  How badass would that be?

If you are a fan of film, Abbott & Costello, Charles Laughton, or have a passion for long lost amazing films, then this a must have for any lover of cinema or collector.  Highly recommended.  I smell a Charles Laughton movie marathon coming on.

“Abbott. Costello. Laughton. Three stars boasting one Oscar® between them deliver the yo-ho-ho-ho-ing of this merry musical-comedy tale of pirates and buried treasure. Casting an acclaimed actor renowned for gravitas in a knockabout romp may seem unusual. Yet Academy Award® winner* Charles Laughton, who portrayed menacing Captain Bligh in Mutiny on the Bounty and the title role in the swashbuckling adventure Captain Kidd, sails into this sea of silliness with great glee. Instigators of most of that silliness are, of course, the legendary Bud and Lou, turning the voyage under the Jolly Roger into a jollier one with their comic timing, verbal jousts and madcap mayhem. Arrrrrr you ready?”

One thought on “Bryan Joins Abbott and Costello To Meet Captain Kidd!!!! (A Review)”