BRYAN’S BLURAY/DVD PICKS FOR THE 2ND WEEK OF MAY!!!

May 10, 2011 black death, bluray, blurays, bryan, collection, criterion, i saw the devil, pick, release, releases, some like it hot, something wild, top gun A huge week for releases which includes Criterion’s Something Wild and Black Death, plus some other goodies.   As usual, in this article, you will get some info about the disc and the extras that come with the movie as well as a personal opinion about the movie and a link to purchase the film over at AMAZON where you can save quite a bit of money, and it will give a small percentage kick back to this site so we can continue bringing you excellent stories and sales.

This week the Alien films are released individually instead of in the AWESOME bluray set that was recently released.  These are of the highest audio and video quality.  The terror begins when the crew of the spaceship Nostromo investigates a transmission from a desolate planet and makes a horrifying discovery – a life-form that breeds within a human host. Now the crew must fight not only for its own survival, but for the survival of all mankind.

This week the Alien films are released individually instead of in the AWESOME bluray set that was recently released. In this action-packed sequel to Alien, Sigourney Weaver returns as Ripley, the only survivor from mankind’s first encounter with the monstrous Alien. Her account of the Alien and the fate of her crew are received with skepticism – until the mysterious disappearance of colonists on LV-426 lead her to join a team of high-tech colonial marines sent in to investigate. Personally supervised by director James Cameron, this special edition includes scenes eliminated prior to the film’s 1986 release which broaden the narrative scope and enrich the emotional impact of the film.

This week the Alien films are released individually instead of in the AWESOME bluray set that was recently released.  Lt. Ripley is the lone survivor when her crippled spaceship crash lands on Florina 161, a bleak wasteland inhabited by former inmates of the planet’s maximum security prison. Ripley’s fears that an mutilated bodies of ex-cons begin to mount. Without weapons or modern technology of any kind, Ripley must lead the men into battle against the terrifying creature. And soon she discovers a horrifying fact about her link with the Alien, a realization that may compel Ripley to try destroying not only the horrific creature, but herself as well.

This week the Alien films are released individually instead of in the AWESOME bluray set that was recently released.  Sigouney Weaver and Winona Ryder star in this terrifying, highly-anticipated sci-fi action thriller! Ellen Ripley died fighting the perfect predator. Two hundred years and eight horrific experiments later, she’s back. A group of scientists has cloned her-along with the alien queen inside of her-hoping to breed the ultimate weapon. But the resurrected Ripley is full of surprises for her creators, as are the aliens. And soon, a lot more than all hell breaks loose! To combat the creatures, Ripley must team up with a band of smugglers, including a mechanic named Call, who holds more than a few surprises of her own.

A very solid horror film that went under the radar for most people.  I really liked this movie.  A very cool horror medieval time period film.  Sean Bean is fantastic in this film.  Bean is like the ultimate warrior medieval era badass.  I mean with Lord of the Rings, Game of Thrones, and Black Death, he is the goto guy for this type of film.  He just owns it.   The audio and video is top notch especially the audio.  Definitely pick this up.  Hardcore!  A band of brothers led by the feared knight, Ulric, sets out on a quest to hunt down a necromancer after sending a young monk, Osmund, to investigate rumours of people being brought back to life. When Osmund discovers the identity of the necromancer, a mysterious and beautiful young woman called Langiva, he finds himself torn between his love of God and his love for the young mistress of Satanic arts.

I did enjoy this movie.  It reminded me a little of 500 Days of Summer but without the comedic aspect really to  it.  Both Gosling and Williams are excellent in the film as they are followed thru their romantic relationship.  Told in the past and present much like 500 Days of Summer.  The visuals are excellent, but I can’t quite see myself watching this movie over and over.  Maybe if there was a Ryan Gosling marathon, but other than that, just once.

Now I have not seen this movie yet, but the premise seems so over the top ridiculous that it would most likely be a permanent staple at any late night movie festival.  It has instant cult status written all over it.  A secret government lab run by Dr. Hess has been trying to create the ultimate killer using the DNA of infamous killers Jeffrey Dahmer and John Wayne Gacy, but there’s one big problem: they’ve escaped! Bloody mayhem stretches across the United States as they go on the ultimate killing spree!  There can be only one.

A John Ford film starring John Wayne in hi-def.  Nuff said.  A Union Cavalry outfit is sent behind confederate lines in strength to destroy a rail/supply centre. Along with them is sent a doctor who causes instant antipathy between him and the commander. The secret plan for the mission is overheard by a southern belle who must be taken along to assure her silence. The Union officers each have different reasons for wanting to be on the mission.

I SAW THE DEVIL (BLURAY)

WOW.  A hardcore fucking film.  I wrote about this a while ago which you can read HERE.  I SAW THE DEVIL is a shockingly violent and stunningly accomplished tale of murder and revenge from Korean genre master KIM Jee-woon (The Good, The Bad, The Weird and A Tale of Two Sisters). Oldboy’s CHOI Min-sik plays Kyung-chul, a dangerous psychopath who kills for pleasure. The embodiment of pure evil, he has committed horrifying and senselessly cruel serial murders on defenseless victims, successfully eluding capture by the police. On a freezing, snowy night, his latest victim is the beautiful Ju-yeon, daughter of a retired police chief and pregnant fiancée of elite special agent Soo-hyun (The Good, The Bad, The Weird’s LEE Byung-hyun). Obsessed with revenge, Soo-hyun decides to track down the murderer, even if doing so means becoming a monster himself. And when he finds Kyung-chul, turning him in to the authorities is the last thing on his mind. The lines between good and evil fall away in this diabolically twisted game of cat and mouse. Pushing the concept of revenge to its most extreme limits, KIM Jee-woon brilliantly transcends the police procedural and serial killer genres in surprising and thrilling new ways.

The Oscar nominated animated film from the director of “Triplets of Belleville” comes this amazing film about two paths that cross. While touring concert halls, theaters and pubs, an aging, down-on-his-luck magician encounters a young girl at the start of her life’s journey. Alice is a teenage girl with all her capacity for childish wonder still intact. She plays at being a woman without realizing the day to stop pretending is fast approaching. She doesn’t know yet that she loves The Illusionist like she would a father; he already knows that he loves her as he would a daughter. Their destinies will collide, but nothing – not even magic or the power of illusion– can stop the voyage of discovery.  Highly recommended.

An iconic film with Marilyn Monroe, Tony Curtis, and Jack Lemmon made by Billy Wilder.  When two musicians witness a mob hit, they flee the state in an all female band disguised as women, but further complications set in.   I’m glad this is on bluray but couldn’t they have sprung for extras??

Criterion once again rolls out the red carpet and releases a quite fun dark comedy with Melanie Griffith and Jeff Daniels.  What seems like a fun romantic rendezvous is not quite what it seems.  Th video is perfect and the lossless audio is great, but it is only in 2.0.  What gives criterion??  Need some 5.1.  But it still sounds great, but is limited.  A hell of a fun and twisted dark comedy.  A must own.  Packed with excellent extras as usual.

PLUS: A booklet featuring a new essay by film critic David Thompson 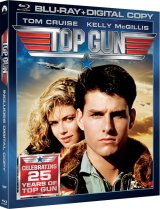 I can’t believe it has been 25 years since this was first released in theaters.  I fell like this is the most overrated film ever to come out in the history of cinema.  So many people like this movie, and it really is a fucking travesty from start to finish.  Not to mention it is the MOST HOMO-EROTIC film ever made.  Gay Porn is more straight than Top Gun.I always find it hilarious when supposedly strong, manly men tell me Top Gun is their favorite film.  I laugh.  This film is only really worth buying for you and friends to make fun of while extremely drunk.  It does look pretty and sound great, but man what a ridiculous movie.

That’s it for this week.  Stay tuned for next week for more great releases.