Bryan Hails a Cab and Takes a Ride With a “Taxi Driver”!!! (A Review) 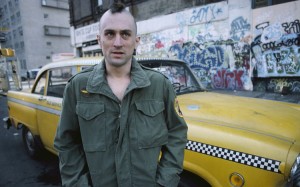 One of the best films in the last 50 years.  Right at the top of that list.  Robert De Niro is fucking brilliant in this movie.  I can’t believe this movie has not been released on bluray yet.  This film is unrelenting, unmerciful, brutal, and all kinds of AWESOME.  A MUST OWN MOVIE.

Taxi Driver is the definitive cinematic portrait of loneliness and alienation manifested as violence. It is as if director Martin Scorsese and screenwriter Paul Schrader had tapped into precisely the same source of psychological inspiration (“I just knew I had to make this film,” Scorsese would later say), combined with a perfectly timed post-Watergate expression of personal, political, and societal anxiety. Robert De Niro, as the tortured, ex-Marine cab driver Travis Bickle, made movie history with his chilling performance as one of the most memorably intense and vividly realized characters ever committed to film.

Bickle is a self-appointed vigilante who views his urban beat as an intolerable cesspool of blighted humanity. He plays guardian angel for a young prostitute (Jodie Foster), but not without violently devastating consequences. This masterpiece, which is not for all tastes, is sure to horrify some viewers, but few could deny the film’s lasting power and importance.  This film is pure and simple, BRILLIANT.  This transfer of audio and video is so amazing for a film of the 70’s.  A must own. 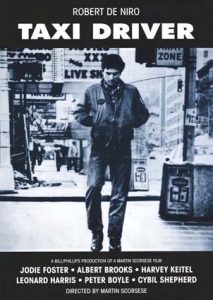 The video presentation is outstanding.  Who would have thought that a film from the 70’s about the seedy underbelly of NYC could look so pristine and clear and pretty.  This is a 1080p transfer that will make all of you go ga-ga all over again for this film.  Surprisingly, this film is crustal clear to the eye in most scenes.  Everything is sharp, bright, and full of depth.  It is very clean with no spots or dirt nor blemishes that caught my sight.  A very impressive video presentation and it might be one of the best transfers of a film I have seen yet from this era.

The audio on this disc is wonderful as well.  It compliments the video very well.  It is a DTS-HD 5.1 sound master and sounds impressive.  The dialogue in this film is usually softly spoken or on the fly, but i never strained or had to rewind to hear something.  It was crystal clear.  The smooth jazz soundtrack is great thru the speakers and compliments everything in the film.  A very true and amazing audio presentation.