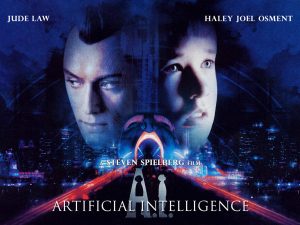 I remember when this film came out and the months that led up to its release.  First off, this was to be Kubrick’s next film following Eyes Wide Shut.  He had storyboards and production art for this film already.  Kubrick wanted to work on A.I. with Spielberg and they went back and forth with each other on who would direct and who would produce.  But sadly, Kubrick passed away before Eyes Wide Shut was released and Kubrick’s wife said in a press conference that Spielberg was going to helm the project himself in tribute to her late husband.  Spielberg pretty much had no option.

So in the months leading up to the release of A.I. there was a GIANT online horror/thriller game that tied in with the film.  There were numbers to call and names to search for on the movie posters and trailers.  I remember playing the online mystery thriller for hours on end in college.  It was spectacular and the first of the online viral marketing for films.  But this film itself is beautiful and horrific.  Spielberg really upped his game to make t look like it was actually made by Kubrick himself .  This film is so hart warming and heart breaking all at the same time.  The journey of a robot who you very well develop feelings for and the tragedy that is around every corner.  Oh the flesh fair.  WOW. What an amazing terrifying experience.  Brutal.  Everything was great about this film.  I really liked it.  I wish Kubrick was alive to see it.  I think he would have been proud.  A must own.   In a future world of runaway global warming and awe-inspiring scientific advances, humans share every aspect of their lives with sophisticated companion robots called Mechas. But when an advanced prototype robot child named David (Haley Joel Osment) is programmed to show unconditional love, his human family isn’t prepared for the consequences. Suddenly, David is on his own in a strange and dangerous world. Befriended by a streetwise Mecha (Jude Law), David embarks on a spectacular quest to discover the startling secret of his own identity.

The stunning bluray master of this film is great.  It’s not the best I have seen sadly but it is very good and far superior than the rest of the releases of this movie.  Everything is fairly sharp, with a few bits of grain here and there.  There are several soft spots that pop up but overall, this presentation is AWESOME.

The sound on the discs boast an impressive 6.1 surround DTS-HD Master audio.  It is fairly front speaker heavy with rarely having  the full surround sound take effect, but when it does it is glorious.  The dialogue is the best part in the audio.  I wish there was more bass though.

All the extras were transfered from the Japanese disc of the film.  There was nothing added for this release which is kinda of disappointing.  I was hoping for some insight to the online marketing game campaign.  There is also no commentaries nor are there any extensive behind the scenes featurettes.  It seems like this disc was just bundled together from previous releases with out the real proper treatment this film deserves.  Hopefully this means in the future there will be an ultimate edition of the movie.