The New Muppet Movie is Getting Cooler and Cooler Everyday!!!

So we know that actor/writer Jason Segel has been developing a new Muppet movie for quite some time now.  Remember Segel’s work with music and puppets from the film “Forgetting Sarah Marshall”?

And remember how good that was?

Well it seems that Bret Mckenzie of the band “Flight of the Conchords” will be lending his talents to do the musical numbers for the new muppet film.  And since the director of Flight of the Conchords, Josh Bobin will be directing the Muppet film, don’t be surprised to see Bret and Jermaine pop up in some cameos in the film.

Now the main stars of the film will be Jason Segel and Amy Adams with the following cameos:

Also this appeared in a magazine recently saying that David Grohl will appear in the film. 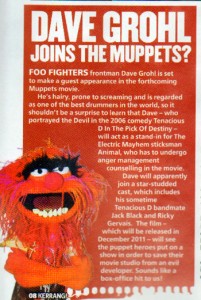 So this is shaping up to be one hell of a fun film and i personally cannot wait for another muppet film.  I grew up on Muppet films, and probably I after Muppet’s Take Manhattan is where the Muppett’s took a turn for the worst and lacked good storytelling.  I am glad thaey are back on the right track.