PS3 Game “Uncharted” Being Made Into Movie 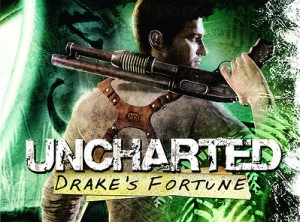 Sony Pictures has confirmed that Director David O. Russell (I Heart Huckabees) has signed on to write and direct the movie adaptation to the PS3 game “Uncharted: Drake’s Fortune”.

Development of Uncharted isn’t a surprise, as it was explicitly designed in the first place to have the quality of a summer adventure film. The story features Nate Drake, a descendant of Sir Francis Drake. Nate is being shadowed by journalist Elena Fisher as he searches for the coffin of his forefather. When found, the object contains a diary that seems to point to El Dorado, and Nate and Elena are soon involved in a run and gun tale featuring pirates, lost gold and mutant humans.

CULVER CITY, Calif., October 8, 2010 – David O. Russell (Three Kings, The Fighter) has been set to write and direct Columbia Pictures’ Uncharted: Drake’s Fortune, an action-adventure based upon the bestselling PS3 game, it was announced today by Doug Belgrad and Matt Tolmach, presidents of Columbia Pictures.  The film will be produced by Avi Arad, Charles Roven, Ari Arad, and Alex Gartner.

The story follows the adventures of treasure hunter Nathan Drake.

Commenting on the announcement, Tolmach said, “David is a tremendous choice to take on this film.  He’s equally adept at combining all the classic elements involved in this property: great character development, strong comedy, and amazing action sequences. He has a brilliant vision for this material and we know he will bring his original, unique voice to this adaptation.”

The game, developed by the acclaimed team at Naughty Dog, was one of Sony Computer Entertainment’s best-selling and most critically acclaimed games for the PS3.  Named IGN’s Best Action Game and Best PS3 Game, Uncharted: Drake’s Fortune sold one million copies in the first 10 weeks of its release at the end of 2007 on its way to moving more than 2.6 (confirm) million copies and spawning a sequel.  That sequel, Uncharted 2: Among Thieves, was a major commercial and critical success, winning Game of the Year honors from several influential critics, being named the most critically acclaimed game of the year by Metacritic, and selling more than 3.8 million copies worldwide.  Both games are among the all-time best-selling games for the platform.

The project will be overseen at Columbia Pictures by Tolmach and Jonathan Kadin.

Now I have never played Uncharted before but friends tell me it is one hell of a game.