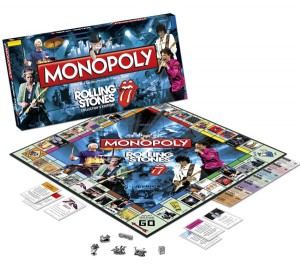 Rolling Stones merchandising are rolling out the red carpet for Monopoly.  It is in conjunction with Monopoly’s 75th anniversary.

The band has replaced some of the properties with their own brand such as: “Beggar’s Banquet” and “Sticky Fingers”.  Houses and Hotels have been altered to Gold and Platinum Records and Community Chest Cards will now be Guitar licks and lyrics.  In addition the Railways are all now named after the Stone’s major world tours and instead of that famous  Monopoly money, we are getting concert tickets to trade.  That sounds cool.  Instead of the usual player pieces such as the dog or car, we are getting drum kits, the famous mouth and tongue, and devil horns to name a few.

I wonder if Altamont will be on the board game or Cocksucker Blues or Hell’s Angles?