FedMex FINALLY gets his Stinkin’ Paws on those Damn Dirty Apes!!! (A Review) 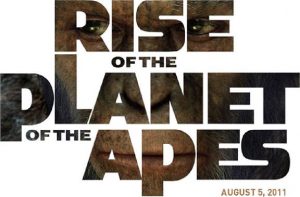 First and foremost, my sincerest apologies for taking so long to finally watch this film.  A very selfish college buddy of mine decided that he would get married the same weekend that Rise of the Planet of the Apes was released.  I was unfortunately on a plane while this film was gracing screens across the country, and as an enthusiast who actually owns the five original Planet of the Ape movies on VHS, I refuse to forgive my friend for acting like a proverbial monkey throwing his own feces and deciding that a future with a woman he loves was more important than Andy Serkis reprising his role as a digitized ape.

So, congratulations on your wedding day buddy, now, let’s get ape crazy.

OK, yes, it’s awesome.  It’s not perfect, but it’s awesome.  The visuals are amazing.  Evidently somehow they used the technology from Avatar to kick Tim Burton (and his remake) in the balls repeatedly, and I’m totally OK with that.  Somehow though, the main ape looked surprisingly similar to Tim Roth’s ape from Tim Burton’s film, and Tim Roth made a damn good ape.  Still, this time, digital apes take over with a vengeance.

The underlying plot is about what you would expect.  James Franco does science, science is dangerous, dangerous means smart apes, the smart apes rise.  But oh how do they rise!!!

The film belongs completely to the apes.  Evidently, Andy Serkis, without having any spoken lines, can run circles around people whose faces are actually on screen.  The apes showed more emotion throughout the film than all but two actors, who I guess I’ll talk about next. 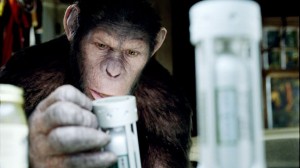 First of all, thank you, John Lithgow, for being John Lithgow.  You are amazing at everything you do, from the stage to playing villains on the screen to making us laugh on the small screen, you are a gift to the arts.  That is all.

Secondly, Freida Pinto, lovely but underutilized in this film.

Thirdly, James Franco.  You’re the male Emma Stone.  You have talent and you’re in everything.  Actually, his character was sufficiently believable, but didn’t leave me with a whole lot to say about his performance.

Now wait a minute…..is that Malfoy?  I couldn’t figure out who the white trash character was supposed to be.  This Limey bastard evidently can’t act his way out of a barrel full of monkeys (*snicker*).

So to summarize, the film truly shines in its scenes concerning apes.  If you have to go to the bathroom, do it when you see the hairless homosapiens on screen.  The written dialogue does not compare to the emotion seen in the digital actors.  Andy Serkis better pray for sequels and/or more movies based around apes…King Kong part 2, Donkey Kong, Donkey Kong Jr…..any of these really, because my good sir, I do believe you’ve found your niche (that or the character from 13 going on 30, that movie was simply delightful).

P.S., keep an eye out for movies within the movie playing on tv screens….unless I’m gravely mistaken, I think there’s some nice surprises there for franchise fanatics.