SPARKY SHAGWELL TELLS US ABOUT THE 4TH EPISODE OF ‘PRETTY LITTLE LIARS’!!! 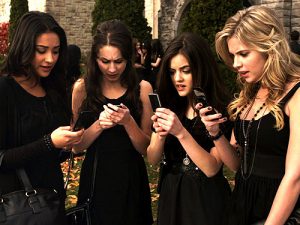 We start out our Monday in the seedy back alley of Rosewood’s Main Street. Where the per capita homeless ratio is astounding. Spencer goes into Schmidt’s Pawn to retrieve the stolen ring. She hands him the claim ticket for a $2k ring and gets back a rusty horseshoe. But way worth the awkward WTF moment to hear Spencer tell the dealer “I need that ring back today so you get behind that counter and find it!” No go and Spencer is the proud owner of a tetanus-laced good luck charm. Once outside, the shock and awe begins and then group jingles on the phone to which they get the text “Lucky for me diamonds are a girl’s best friend. A” Aria looks up to see a very creepy optometrist’s ad with the slogan “Someone’s Watching You So Look Your Best.” Coincidentally, Aria is looking quite adorable.

These are the facts:

All is getting back to normal in the Montgomery house. Blueberry pancakes, mom is back, Mike is angsty and Aria is self-involved. Forgetting that Mom is now the new Mr. Fitz. Maybe now they can start learning some stuff in English class.

Spencer walks in to find suspicious Melissa tearing the house up again looking for Ian’s passport for ring insurance purposes. Yeah, right? She is such a female tool.

Emily’s sad because her sneaky plan worked and is feeling guilty. Her mom comes in with a mystery box of crap from Danby and a not so subtle note reading, “welcome to the A-Team.” Hmmm… wonder who that is from?

Hannah helped Lucas score a date with Danielle and he is freaking out, “I am completely off my game” and her fab retort, “You don’t have game.” I heart Hannah. So Hannah and Caleb agree to go on a double date as Lucas’s wing-people so he won’t swallow his tongue. Danielle is convinced that Hannah is in love with Lucas and only brought Caleb along to make him jealous.  In the end, Hannah’s scheming ways gets Lucas a little bit of one-up-manship loving. All is well. I hope Hannah and Caleb get back together.

Aria’s little brother is full of mystery and is nowhere to be found. A quick to trip the basketball courts gives her a chance to drool over shirtless Jason. He comments on how he loved her pink hair and she grins like a girl looking at a dreamboat. I like that kind of smile. She finds out that Angsty Mike has not been playing ball for a couple months. Where is that bastard? Is he cooking meth? Having butt-sex? I just don’t know.

Hannah goes to therapy Anne with no resolve. After the date, Lucas thanks her for being a great person and telling her that she can be a good person. The next day Hannah goes to Anne and tells her about that experience then has a ghost moment telling Allison that she is bad and to basically go to hell. Again, I heart Hannah. But someone is talking a bit too much or afraid the girls are getting chatty because Anne’s office is broken into and on the wall is a note – Nosey Bitches Die.

Emily tires me. I cannot even devote a review on her.

Spencer confronts Wren at the hospital and with her tactful ways tells a nurse to be somewhere else. He admits that he gave Melissa some meds and that Ian is hiding somewhere outside of Rosewood. He did not know that Ian tried to kill Spencer, seems like Melissa the tool, forgot that little detail. What a bitch. Poor Wren, he just wanted to get in the pants of some hot sisters and now look where he is. Later he convinces Melissa that he needs to see Ian before he can get the rest of the meds. She buys it and now the girls have an in to locate Mr. Tool. Spencer comes home to find a note from her folks (worst parents in the world, btw) asking her to check on Mel. She heads to the barn and door is cracked open with a packed suitcase and the shower running. Spencer opens the case and sees his and her neatly packed items along with both passports. The shower is off and Spencer is out the door. I would like to take a moment to point out that M gets out of the shower, dried, in a robe and then to the door in record time.

So, the night arrives that the girls follow M and W to Ian’s secret hideout. All goes according to plan and they arrive at some creepy barn in the middle of nowhere. Melissa screams and Spencer runs to her (she is a good sister). Inside the barn we see Ian… dead… with a self-inflicted gunshot wound to the head and a confession to killing Allison. WHAT???  Spencer hugs Melissa and she is freaked to see her there. I would be comforted, but I am not a tooly bitch. A quick camera pan points us to a row of 4 horseshoes all rusty and one missing – gasp. WTF? And guess who has the missing horseshoe?

Finally, we end the show with the return of hooded mystery person putting a cell-phone in Spencer’s purse. Those stupid girls always leaving their shit around and cars unlocked with the window’s down.

See You Next Tuesday where more shit is about to hit the fan.