“The Hunt is a hell-0f-an entertaining film and loads of fun.”

Director Craig Zobel (Compliance), producer Jason Blum, and writers (Carlton Cuse, Damon Lindelof) of LOST fame could have never predicted the events that led up to their film The Hunt being canceled and moved back months after its original debut on the big screen. Not only were there a couple of mass shootings that occurred, but the current US President mentioned the film in a negative way without seeing it and thus had this funny-as-hell and bloody good time of a movie pushed later in the year. With that insane amount of free publicity, The Hunt became the most curious film to see, which was certain to raise major controversy with its subject matter – being a modern-day Battle Royale between the extreme political divide of this country. The result is a significantly funny film that mixes in some major slapstick violence that would make Quentin Tarantino excited along with some corny dialogue and a few subtle witty ideas. The Hunt is a ton of fun and gives a healthy poke to both sides of the spectrum.

The Hunt is not a serious film whatsoever and never allows itself to cross over into a preachy one-sided message about what’s right or what’s wrong. On the contrary, this is a silly satire with enough blood and guts for a Stuart Gordon film that pokes fun at both ends of the political landscape. It’s a quick, tight 90-minute carnival ride that packs laughs and hilariously shocking moments for each character.

The film centers around a group of people who have been drugged, kidnapped, and flown to a secret location, only to wake up with sexual mouth gags locked on their faces in a large open field. These people manage to get unlock their muzzles where they open up a large wooden crate that has a ton of weapons of all shapes and sizes inside. Before anyone starts asking questions, a bullet whizzes by and a skull is blown clean off. It’s soon realized that all these unfortunate people have one thing in common – they’re mostly redneck republicans, being hunted by the rich, elite liberals, due to their differing beliefs. 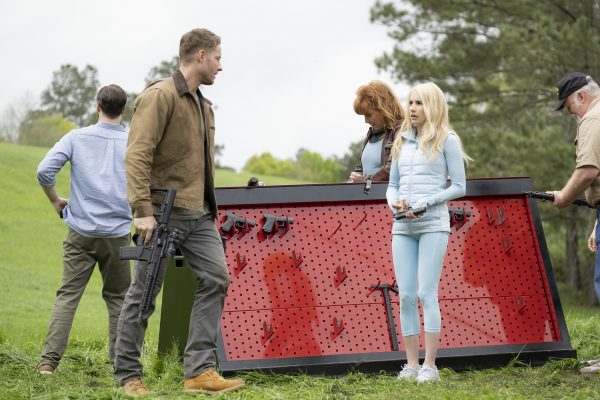 The violence is not made in a serious or melancholy manner, but rather a stylized cartoonish way. It’s not all about gun violence either. More often than not, arrows, landmines, and kitchen appliances are used to ward off a character to great comedic effect. This all culminates in a Kill Bill style climax between two opposing women, Betty Gilpin (Glow) and Hilary Swank (The Next Karate Kid). The gore and fight choreography is top-notch and the one-liners by everyone involved are so bad – they’re painstakingly great. The motive behind this bloodbath in the story is simple and less thought out than it should be, but then again, that plays into the political climate today, which was a wonderful parallel.

The performances from all the actors, no matter how big or small were wonderful and were infectious in the way that they were having a blast on set. The Hunt is not here to offend anyone, but rather to spark a big laugh and make society take a step back and look at themselves and have a chuckle about how violently serious everyone became about politics and thinking a different way. The Hunt is a hell-0f-an entertaining film and loads of fun.