“The Last Black Man in San Francisco is not perfect in its execution, but the story is moving despite its disjointed structure and flow.”

An interesting story comes out the U.S. capitol of “in your face.” In The Last Black Man in San Francisco, Joe Talbot, the director, teams up with Jimmie Fails (Jimmie Fails) for a second time to bring you seemingly Fails’s own story of the journey of living with loss. Orphaned from a drug addict mother and deceased father, Jimmie has lived with a friend, Montgomery Allen (Jonathan Majors) for some unrevealed amount of time. Each day, Jimmie and Mont take the bus to his childhood home. Much to the chagrin of the current owners, Jimmie touches up his ancestral homestead. When ownership of the property suddenly is in flux, Jimmie seizes the moment. What followed enlightened Jimmie’s world and hopefully the viewers in the audience.

The Last Black Man in San Francisco’s cast is talented and varied. Fails is a newcomer with a great capacity for emotional depth and expression. Being his first full-length feature, Fails shines and tells his story with maturity and intensity. The WOW factor came with the intricate and unusual performance of Majors. A newish arrival to the acting world, Majors gave me a “Rain Man” vibe mixed with a “Silent Bob” wisdom and perspective. His character’s progression was a wonder to behold. A nice surprise was the venerable Danny Glover, yes, Mr. Lethal Weapon hero and unfortunately The Color Purple dickhead himself. His small role in The Last Black Man in San Francisco gave the audience moments of levity and amazement as we watched him watch a movie through the aptly descriptive words of Mont. 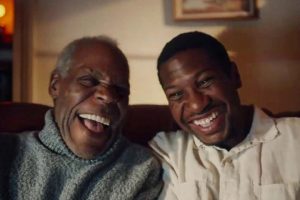 The Last Black Man in San Francisco is not perfect in its execution, but the story is moving despite its disjointed structure and flow. The seemingly random and completely annoying group of smack talking wannabe thugs that resided on the street to each other goes from being a nuisance to the foundational element of the film’s main theme. The transition between themes was irregular and produced a bit of a “lost in a maze” feel. Holes exist in the issues of the suburb of SF that leaves them enigmatic. The cinematography was effective and innovative while showcasing the simple beauties in architecture, landscape, and even providing a ball’s point of view along with the head it impacted. Quite ingenious! 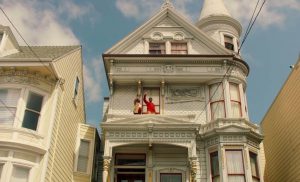