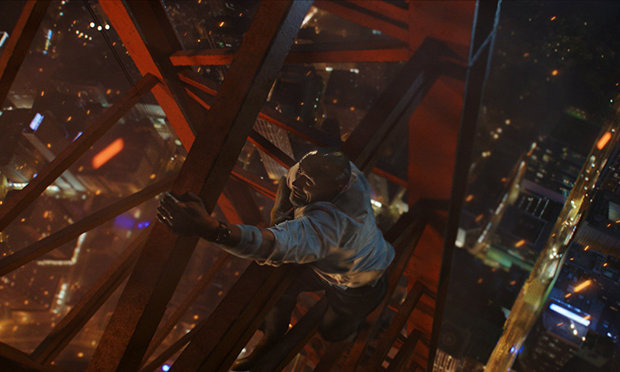 Summer blockbusters have been a staple for all of us for many years in the movie theater. We can expect, a ton of action, one-liners, witty actors, explosions, feel good endings, and sometimes monsters, zombies, aliens, robots, or a combination of all four. These big summer blockbusters usually lack an award winning story or break-through performances, but it makes up for that in sheer entertainment and high stakes. When you bring in a former charismatic WWE Champion with Dwayne ‘The Rock’ Johnson to play the “every character from our favorite 80s-90s action movies, you’re gonna get something wild, fun, and nothing short of spectacular, which is why I’m hear to say that ‘Skyscraper‘ is the big budget summer blockbuster you’ve always wanted.

It has everything you’d want in a big over-the-top action movie, including The Rock, the biggest building in the world that is about to be demolished by foreign terrorists, explosions, and some fun one-liners. The films is a brisk 100 minutes and gets straight to the point from the beginning. There is no dilly-dally here, which is a breather from most films. The Rock plays a former FBI agent who lost his leg in a previous mission, who now owns a security company that has been hired to provide all the safety and security for the most expensive and tallest building in Hong Kong, which will house hundreds of thousands of people.

Right before they greenlight to let people start moving in, some terrorists take it over and begin to set fire and explode the building, while The Rock’s wife and two young kids are still in there. The Rock takes it upon himself to climb a crane and jump into the building and save his family – nothing more, nothing less, which is just fine with me. If you have a fear of heights, this film might give you the palm sweats, because there are a ton of great shots of The Rock scaling a building from 200 floors up, which is as exciting and terrifying as it sounds.

What impressed me even more was that the Rock’s character wasn’t the end all – be all person to beat everyone up easily. In fact, The rock gets his ass handed to him quite a few times, which made this whole film a bit more believable and even funny to see The Rock get some of his own medicine. If you go into this movie trying to figure out the logic, you’re gonna have a bad time, but instead, just enjoy ‘Skyscraper‘ for it’s sheer entertainment value in that a guy tries to save his family no matter what obstacle comes before him.

The Rock is perfect in these roles, and like his character in WWE, is flawless in getting the audience pumped up for big reactions. I’m just so glad this transferred on film so well, because he still is the best at this. ‘Skyscraper‘ is a ton of fun and deserves to be seen on the big screen with big sound.