ISIS has quickly become a hot topic in politics and the new organization of terror to defeat in the Middle East. Their ruthless genocide and enslavement of women has sparked major concern around the world, and many exasperated civilians are giving up their lives to answer the call of duty. Taking us right into the desert trenches of Northern Syria, the new documentary ‘Fear Us Women‘ showcases Hanna Bohman, a Canadian who recently reevaluated her life and volunteered to aid in a revolution of women’s rights. In just under thirty minutes, Director David Darg has gracefully shot an enlightening chronicle of sacrifice and bravery. He shows us that women can be fierce and, above all else, fearless.

“ISIS believes that if they’re killed by a woman, they don’t go to heaven,” Hanna’s voiceover discloses as footage of her fellow Women’s Protection Unit (YPJ) is braving a red dust storm. “It’s an insult to be killed by a woman.” As she walks with her sniper rifle to the militia’s next destination, the camera slowly focuses on a spiteful Arabic tattoo that stands out like war paint. “Fear us women,” Hannah translates the poem, “oh enemies of humanity, for you who die by our hands will burn in hell forever.” 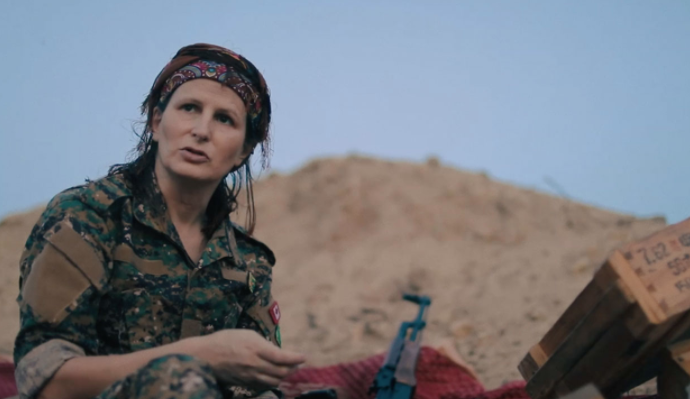 Over the course of three years, the film follows, interviews and gives critical attention to a group of brave women that, crouched alongside their allied male units, selflessly fight to take back captured villages. Armed with experience and talent, Director David Darg has proportionately documented both the devastation and the art of battle. Right in the thick of the dirt-filled posts, bullets can be heard whizzing by as Hanna cautiously ducks and speaks to the camera – unperturbed and determined to finish her story. “I actually like the fighting,” Hanna later confesses as the group gathers around a comforting night fire, celebrating a victorious day. “I like the sound, the smell, the stress and the ground shaking. There are people that are wired to fight, and I’ve always kinda liked fighting.”

‘Fear Us Women‘ is courageous and insightful. It’s a fascinating and relevant documentary that shines a light on ISIS, but is really about a collective effort to free women from the shackles of an oppressive social system. This film will give you hope for the future, and it teaches us no matter your sex, it’s never too late to make a difference.