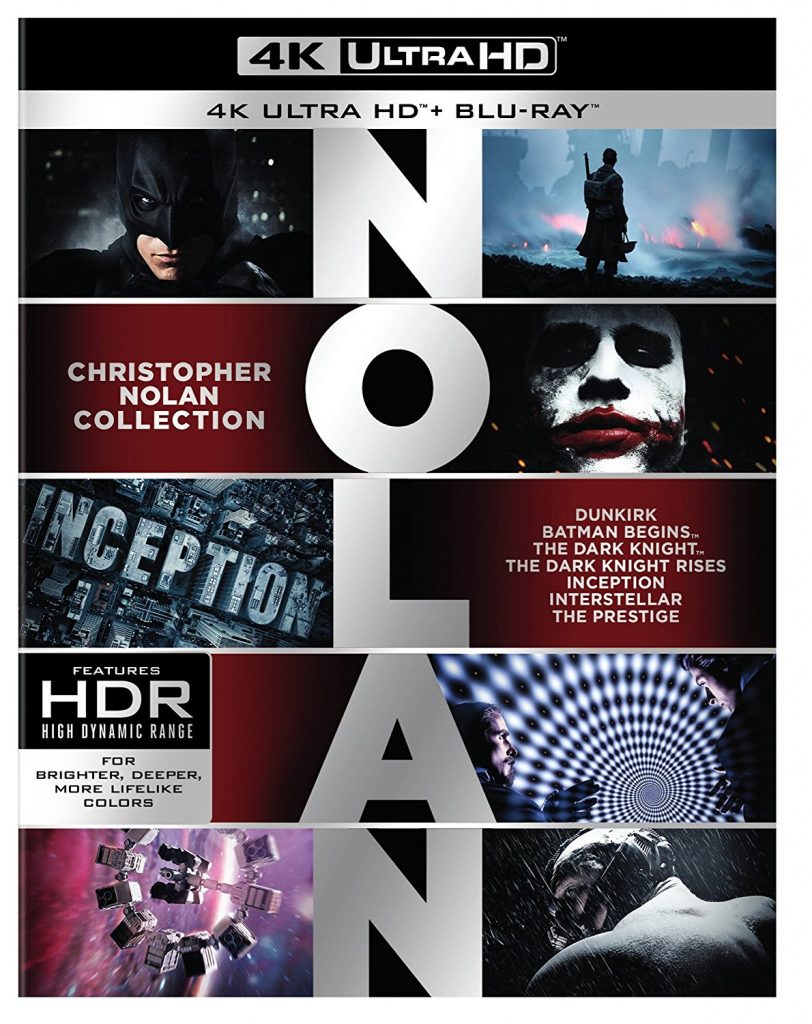 If you’re like me, then you have grown to love filmmaker Christopher Nolan over the years. Come December 19th, most of his films will be released on 4K UHD for the first time ever. The films include the ‘Dark Knight Trilogy‘, ‘Inception‘, ‘The Prestige‘, ‘Interstellar‘, and the recent ‘Dunkirk‘. Each film will come with HDR as well, meaning a richer and deeper looking image for each movie. Each film will feature extras, the standard Blu-ray Disc, and Digital Copies of each movie. The whole collection will retail at about $150 with the ‘Dark Knight Trilogy‘ retailing at around $70. Of course with the holidays coming up, expect big discounts everywhere for these.

“4K Ultra HD with HDR is an incredibly exciting new home video format that allows a much closer recreation of viewing the original film print,” said Christopher Nolan. “The deeper color palette comes closer to matching the analogue colors of film and we’ve restored the original theatrical mixes for this release. If you can’t rewatch these films in the theater, this is the best experience you can have in your own home.”

The individual titles from Warner Bros. will feature the films on 4K Ultra HD with the feature films in 4K with HDR, Blu-ray™ discs of the films in hi-definition, a bonus Blu-ray Disc with behind-the-scenes content and special features, and a Digital copy of the films. 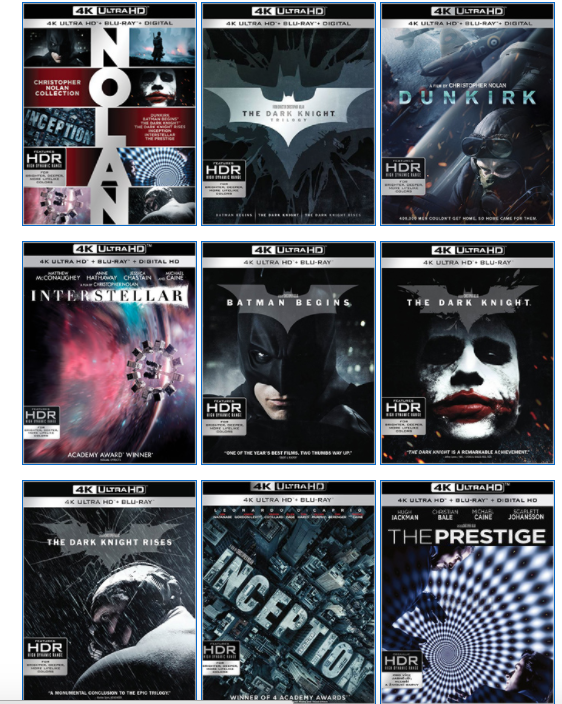 Nolan’s awe-inspiring masterpiece “Interstellar” will be released on 4K Ultra HD in a 3-disc Combo Pack that includes the film on 4K UHD and in high definition on Blu-ray, as well as a bonus Blu-ray Disc™ with three hours of in-depth, behind-the-scenes content detailing the epic shoot, the scientific realities explored in the film, a look at creating the stunning visuals, and much more.

“The Prestige” will be releasing as a 4K Ultra HD Combo Pack (4K UHD + Blu-ray + Digital Copy) that includes the insightful The Director’s Notebook: The Cinematic Sleight of Hand of Christopher Nolan, a multi-part behind-the scenes look at all aspects of the creation of the film, and The Art of the Prestige interactive gallery. 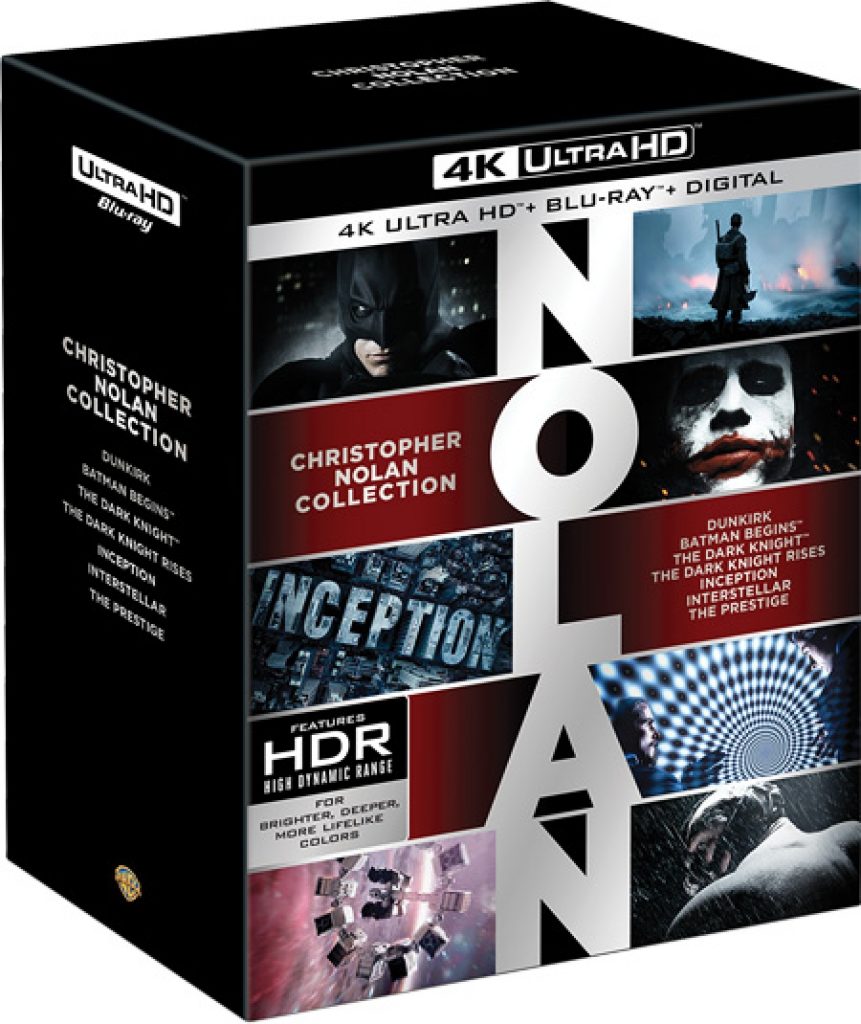 “Batman Begins” explores the origins of the Batman legend and the Dark Knight’s emergence as a force for good in Gotham.  In the wake of his parents’ murder, disillusioned industrial heir Bruce Wayne (Christian Bale) travels the world seeking the means to fight injustice and turn fear against those who prey on the fearful.  He returns to Gotham and unveils his alter-ego: Batman, a masked crusader who uses his strength, intellect and an array of high tech deceptions to fight the sinister forces that threaten the city.

The follow-up to “Batman Begins,” “The Dark Knight” reunites director Christopher Nolan and star Christian Bale, who reprises the role of Batman/Bruce Wayne in his continuing war on crime. With the help of Lt. Jim Gordon (Gary Oldman) and District Attorney Harvey Dent (Aaron Eckhart), Batman sets out to destroy organized crime in Gotham for good. The triumvirate proves effective, but soon find themselves prey to a rising criminal mastermind known as The Joker (Heath Ledger), who thrusts Gotham into anarchy and forces Batman closer to crossing the fine line between hero and vigilante. Maggie Gyllenhaal joins the cast as Rachel Dawes. Returning from “Batman Begins” are Oldman, Michael Caine as Alfred and Morgan Freeman as Lucius Fox.

It has been eight years since Batman vanished into the night, turning, in that instant, from hero to fugitive. Assuming the blame for the death of D.A. Harvey Dent, the Dark Knight sacrificed everything for what he and Commissioner Gordon both hoped was the greater good. For a time the lie worked, as criminal activity in Gotham City was crushed under the weight of the anti-crime Dent Act.

But everything will change with the arrival of a cunning cat burglar with a mysterious agenda. Far more dangerous, however, is the emergence of Bane, a masked terrorist whose ruthless plans for Gotham drive Bruce out of his self-imposed exile. But even if he dons the cape and cowl again, Batman may be no match for Bane. Christian Bale stars, along with Michael Caine, Gary Oldman, Anne Hathaway, Tom Hardy, Marion Cotillard, Joseph Gordon-Levitt and Morgan Freeman.

Cobb (Leonardo DiCaprio) is a skilled thief and coveted player when it comes to extraction: the stealing of valuable secrets from deep within the mind during a subject’s dream state. His skill, though, has turned him into an international fugitive and he is now being offered a chance at redemption. One last job.  One last job to give him his life back.  But only if he can pull off the impossible – inception — not stealing an idea but planting one.  If Cobb and his team succeed, it will be the perfect crime.  However, no amount of meticulous planning can prepare the team for the dangerous enemy that seems to predict their every move. An enemy that only Cobb could have seen coming.

Matthew McConaughey stars as an ex-pilot-turned-farmer who must leave his family and a foundering Earth behind to lead an expedition traveling beyond this galaxy to discover whether mankind has a future among the stars.  The film also stars Anne Hathaway, Michael Caine, Jessica Chastain and John Lithgow.

“Dunkirk” opens as hundreds of thousands of British and Allied troops are surrounded by enemy forces. Trapped on the beach with their backs to the sea they face an impossible situation as the enemy closes in. The story unfolds on land, sea and air. RAF Spitfires engage the enemy in the skies above the Channel, trying to protect the defenseless men below. Meanwhile, hundreds of small boats manned by both military and civilians are mounting a desperate rescue effort, risking their lives in a race against time to save even a fraction of their army.