Cocaine is a hell of a drug. Globally, it is the second most popular and in the ’80’s, it was king. And Director Doug Liman wants you to know that one American is partly responsible for not only the narcotic’s rise in popularity, but also for fueling one of the largest cartels in global history. In the new action biopic, ‘American Made‘, Tom Cruise flies high and returns to familiar aviation territory as Barry Seal, a TSA pilot turned drug smuggler. This role really puts Tom back into his adventurous element and is easily one of his best performances in recent memory. He proves that his charm and charisma isn’t lost, and personal judgements aside, sometimes it takes crazy to play crazy.

There’s an immediate vintage feel as the ‘Universal‘ logo switches mid rotation to the static version of decades before. A collection of historical footage from the late ’70’s perfectly sets the scene before we’re introduced to Barry in the cockpit of his 1978 Boeing 707. As he takes the opportunity to prank his fellow sleeping passengers and co-pilot with a quick nosedive during an overnight flight, apologizing with, “Sorry, we experienced a little bit of turbulence,” Barry reveals he’s a spitfire — and he’s definitely ready for more excitement in his life. 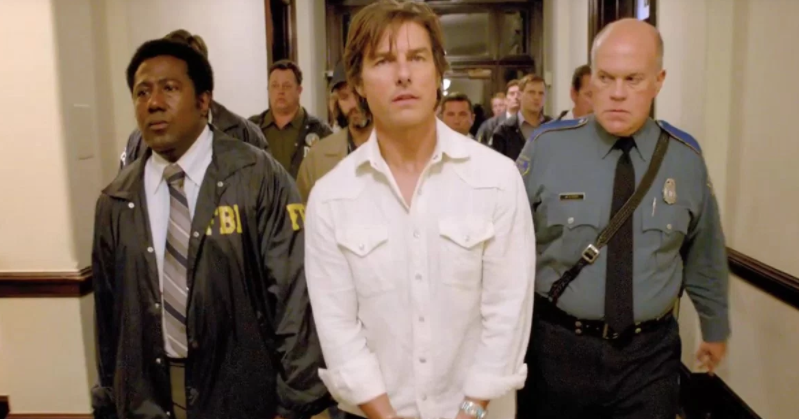 Unbeknownst to him, the CIA is already aware of Barry’s talents as a young commercial pilot and his small cigar smuggling business. He comes to this realization when he is confronted by an agent, Monty Schafer (Domhnall Gleeson), at an airport bar. He proposes he take secretive pictures for them while flying over areas of interest in South America. But even after providing phenomenal photos, Barry realizes the CIA isn’t giving him a raise, and he decides to accept another proposal from the Medellin Cartel to deliver drugs on his return flights to the United States.

Living a double life, the CIA turns a blind eye, but soon Barry’s luck runs out and he is forced to move to Arkansas after Schafer warns him of the looming DEA. Fleeing with his family, he’s set up with a large residence in exchange for continuing to work for the CIA by supplying guns to The Contras. As the money starts pouring in, however, so do the problems, and this is when the movie really gains its dynamism.

The film mashes dark humor and action expertly. It creates a rare platform of storytelling by using found footage, animation and live action to both emphasize the time period, and tell an engaging story of personal and government corruption. Suit up and get ready to feel the greed and speed! ‘American Made‘ is recklessly fun and cynical; it’s an energetic return to the cinematic experience we needed!

2 thoughts on “Film Review: ‘American Made’!”