In the city of Manila, which is the capital of the Philippines and is considered the most densely populated place on Earth, there is a maternity hospital called Fabella that is said to be the busiest maternity ward in the entire world. That brings us to the documentary Motherland, directed by Ramona S. Diaz. This hospital delivers between 60-100 babies daily as the mothers share a bed with others and their respective newborns. Fabella is a public hospital for women and families who have very little to no money, but help with delivery, surgical procedures, and other forms of care for this explosion of babies every day.

Due to the very strict and poor budget of the hospital, there are no incubators or rooms for the patients or newborns. Instead, Fabella practices KMC care, meaning Kangaroo Mother Care, which gives each patient a big tube top to put on, which keeps their baby warm, against their chest at all times. Along with food rations and a bed that two to four people share, that’s what these mothers have to get them through their deliveries. Diaz doesn’t mess about with interviews with anyone or archival footage here, but rather her camera is always placed in the center of the action that captures the normal conversations and births of each lady.

Through these interactions, we learn about a few select women and nurses. Surprisingly, every nurse and doctor was highly capable of every procedure and piece of information with their job. At no point did you think any of the medical staff was incompetent. With the amount of patients each day in this maternity ward, the nurse staff keeps a relatively calm house here. One of the patients has given birth to twins, which she didn’t know she had twins until they were delivered, because she had not been to the doctor yet. Another patient is on her seventh birth and tries to tell the other young women to be careful and not have as many kids.

Another very young girl is struggling to have her tubes tied for a while in hopes she can get an education, instead of having more kids. When viewing the film, you come to see that most of these women live in very poor conditions, have no jobs or money, and are on their 4th or even 7th kid here, which has a lot of the women happy to be in this hospital with people who care for them, instead of the other way around. The hospital also helps with finances in every way, shape, and form as well as with family planning and free IUD procedures. It’s a more than capable hospital and staff as Diaz perfectly shows every aspect of what it’s like to be a patient and nurse in this chaotic, yet serene place. 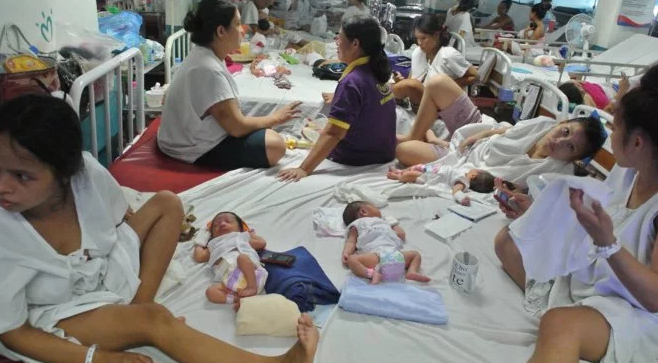 With her in-the-center style, it’s hard to follow any certain story or narrative with any patient, which could have helped with titles or names of people here or there. Still, Motherland is a beautiful documentary that gives you an overwhelming feel of what these women and nurses go through. In the end, I think both Manila and the US can learn and take things from one another for the best.