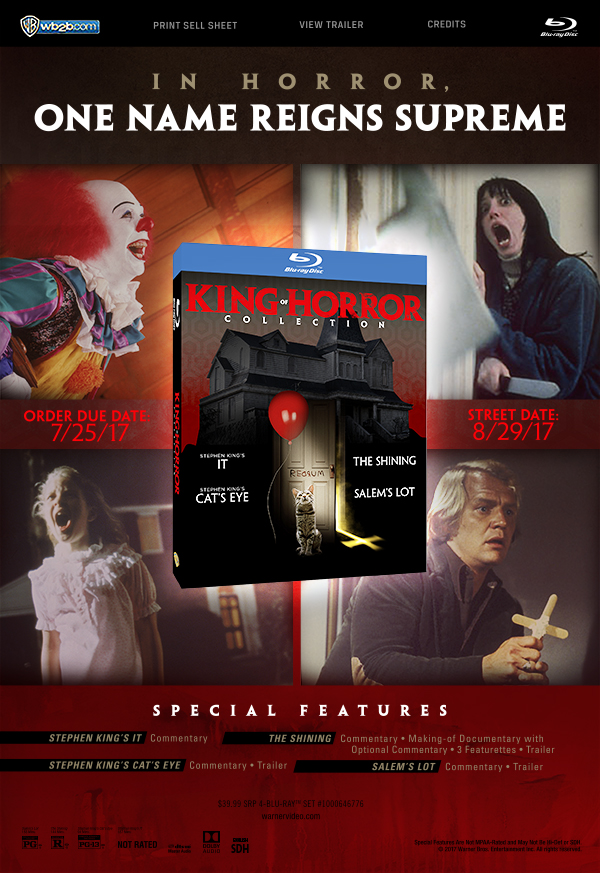 Warner Bros. is looking to release a Stephen King 4 movie collection on August 29th of this year in one collection. The movies are Cat’s Eye, It, The Shining, and Salem’s Lot. These are all great films in my opinion.

Well, let me backtrack that statement a tiny bit. The Shining and Salem’s Lot are probably some of the scariest movies ever made that still make me sleep with my little turtle nite-light on. It on the other hand doesn’t quite hold up other than the scary-as-hell Pennywise scenes, which was played by the iconic Tim Curry. I still have visions of that fucking clown with sharp teeth telling me to float down there. And truth be told, it’s been forever since I’ve seen Cat’s Eye, that I need to revisit it, but I seem to remember enjoying that film.

Bonus features at the moment are mainly audio commentary tracks, but I don’t know with who. I would be awesome if they were with Stephen King himself, but who knows at this point as no other details have been released. The Shining looks to have the same behind-the-scenes documentaries that were available on previous releases, although, I’m willing to be my entire record collection that King won’t be delivering a commentary on that movie, because he famously hates Kubrick’s version. Still, this is a cool set that I hope does well, so we can get Vol. 2 as well.