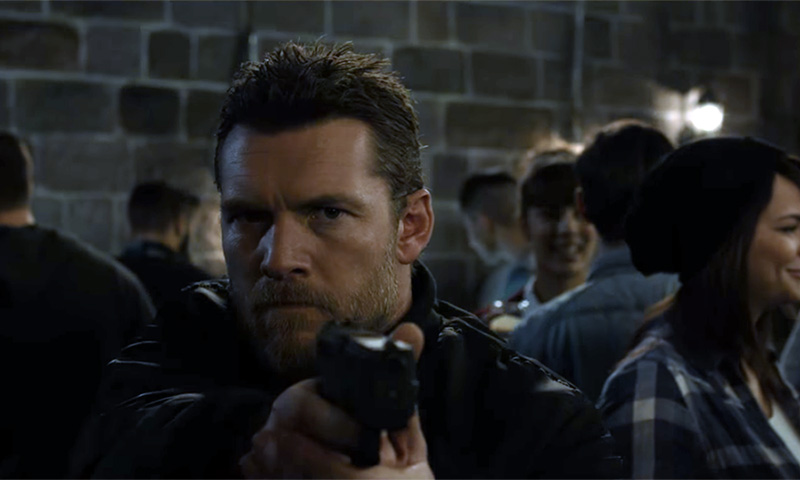 The Hunter’s Prayer is the best network TV pilot for a show that will run out of ideas and suck by season 2 that I’ve seen in awhile. It’s full of clichés, caricatures, and familiar twists for any thriller genre. If someone took Taken, The Professional, Cobra, Jack Reacher, & Jason Bourne (the bad one), put them in a blender, and then strained it to remove all the good healthy stuff from those movies, you’d have The Hunter’s Prayer. All that said, I didn’t check my phone during it, so I guess I’m the sucker.

The Hunter’s Prayer opens with the murder for a rich looking couple and their maid or nanny. The man who commits this crime looks like he walked straight out a Gap jeans ad. Meanwhile in some part of Europe we meet Lucas played by Na’vi enthusiast Sam Worthington. Sam doesn’t get enough credit for being “that guy” in that he’s perfectly serviceable in almost every role he plays. They may not be great performances but I usually buy in to his choices for the role. Well in this one he has a beard and looks a bit disheveled so we know he’s dealing with some inner demons. Lucas receives a contract on his computer for Ella and heads out on assignment to kill her. Ella’s parents were the rich people killed in the opening scene. They were murdered because her father was hiding money from a rich gentleman who does business “things” and people who cross him get killed by his stable of assassins for hire. Lucas, of course, can’t go through with it and starts to protect Ella.

Along the way we learn that Lucas has a family he is estranged from and a daughter who looks a bit like Ella. Whoa! We also discover that Lucas was a super soldier in Iraq and some of the things he did over there keep him up at night as he battles with his morals. Double whoa! Finally, it turns out he is addicted to drugs that are supplied by big bad corporate man! Trifecta! Lucas and Ella decide to turn the tables on their pursuers and plan to kill the “big bad” but not before we get a great scene of Lucas conquering his drug addiction by quitting cold turkey and some pretty well shot fights/shoot outs.

The movie ends as predictably as it began. Good guys win and Lucas is back to being a good man. The fights and shoot outs were actually well done for what I assume wasn’t a big budget film. There are also some car chase scenes that really showed off the director’s ability to stage a decent car chase which I really respected since most $200 million films can’t even figure that out. The locations and sets were also fantastic. I don’t know how they got all of these locations but there are some beautiful cliff sides, mansions, castles, and forests that several pivotal scenes take place in that are breathtakingly pretty.

Ultimately, the script and predictable story is what let this film down. It was just a collage of things we’ve seen for decades. Nothing new or unique. I meant what I said at the start, if this movie was on network TV as a pilot for a limited series I would watch. It would’ve been pretty cool to have Ella (who inherits her parent’s money) take over corporate man’s World after he dies and use Lucas to protect targets or something as a series. I’d be down for 8 episodes of that any day of the week. As a movie? Nah, I’m good.