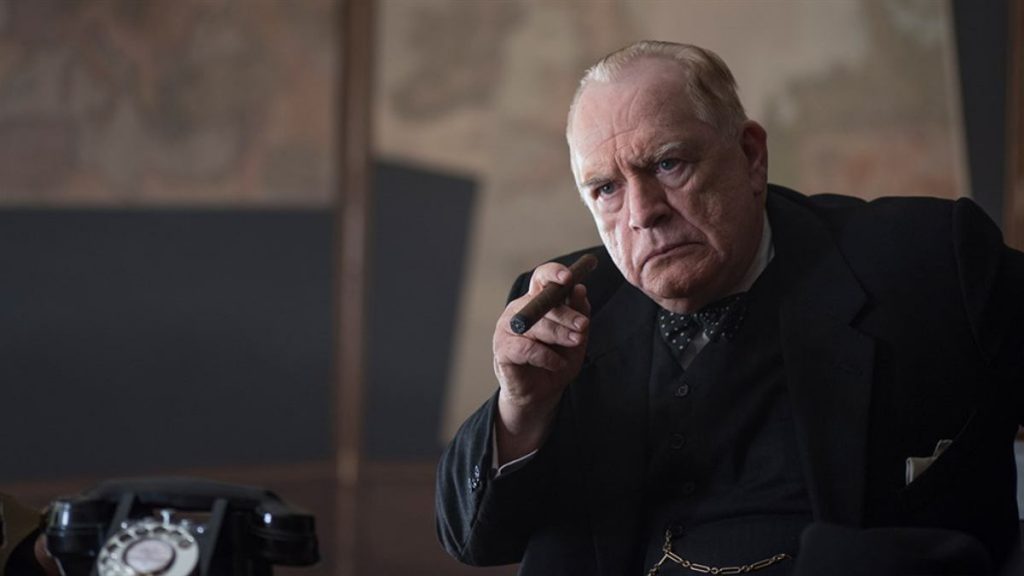 If you’re expecting a hardy D-day battle of gunfire and malice, you may want to look elsewhere. Ambitious efforts were made to create a heroic biopic and personal portrait of the Prime Minister, but at long last, the result is a cigar-filled melodrama that limps with exaggerated dialogue. Concentrating mostly on diplomacy and tensions between allies, ‘Churchill’ is a strained history lesson that only manages to blow smoke over a fascinating true-life story.

For all of its shortcomings, ‘Churchill’ does pull off a dreary and dim atmosphere. The film opens with a distraught Winston Churchill (Brian Cox) on a beach, imagining the blood-soaked sea foam of his memories past; haunted with the mistakes he made as a commander during WWI. As the picture fades briefly from color to black and white, we’re matched with the manifested depression and anxiety he currently faces. It’s only days before both British and American soldiers are scheduled to surprise attack the Nazis off the coast of France on June 6, 1944.

Burdened with the knowledge that thousands of innocent men are potentially being sent to the slaughterhouse, Winston makes it his mission to meddle with the plans of Operation Overlord and voice his opinions to General Dwight Eisenhower (John Slattery) and the rest of the highest commanders of the allied forces. But much to his surprise, his valiant speech is dismissed and he’s left feeling disrespected, with only a limited amount of time to change their minds.

Throughout the rest of the picture, there’s an attempt to break away from the legend and show a more human side of Winston, but unintentionally the serious moments and shouting matches become comedic. At times it’s hard to stifle a laugh, and that’s certainly not what a man like Churchill or the serious subject matter deserves. Cox gives an excellent performance and is convincing as Churchill, but the film chooses to focus more on clichéd soap-opera theatrics, and if anything, belittles rather than honors this masterful trailblazer. The depthless characters that surround him seem to look at him with only pity, and in one scene, Winston exclaims to his wife, Clementine (Miranda Richardson), “Why don’t you marry General Eisenhower?! A handsome, young man still in his prime! Not some clap-top, moth-eaten old lion!”

Largely the film just feels sloppy; whether it’s scrapping together events or trying to turn every exchange of words into a Shakespearean verse, it’s missing both battle and integrity. It’s a film that just sadly humiliates one of the greatest Brits of all time.