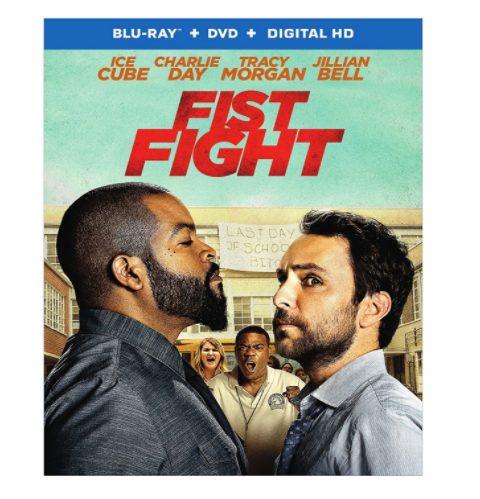 Before I get into this, I need to say that I’m a huge fan of Charlie Day and Ice Cube. They have a lot of talent that spans different genres and keep delivering on each film they make. That’s not the case with Fist Fight though, which I must say is NOT their fault. Ice Cube is great in his role as Mr. Strickland, a high-school history teacher who is not above of cursing in class or taking an axe to a student’s desk with a room full of students. On the other hand is Charlie Day playing the straight and narrow guy who hates confrontation named Andy Campbell who seems to be the world’s coolest English teacher, but is lost in this movie.

Fist Fight takes place on the last day of high school where the students pull pranks on everyone, mostly the teachers and administrators, which causes Ice Cube and Charlie Day to schedule a big fist fight after school. Sounds like fun for sure with these two leads and perhaps a distant relative to the hit 1980’s film Three O’ Clock High, but to even put those two in the same sentence would be silly. One thing that Fist Fight tries to do is create some sort of satire or message on how screwed up our school system is with overcrowding, standardized tests, teachers in peril of losing their jobs at any moment, and no money for books or equipment.

These issues are touched on, but in the silliest of ways, leaving it all on the back-burner, so the horrible dialogue can be pushed up front to generate laughs that are not deserved. None of the film is realistic or remotely fun, but rather annoying. I know not all films are supposed to be realistic, but with Fist Fight, it’s what they more or less strive for, but the way they allow the students to behave in this film is something else. None of it is believable. When I said above that the students prank each other, it’s not really pranking as much as committing crimes and being hateful to everyone, particularly the teachers.

If this were a real movie, every kid would be arrested and booked in jail – and they would deserve it. Stealing and destroying cars, selling drugs, trying to physically hurt people, including their elders are all a part of their so-called “pranks”. Every moment these teenagers are on screen, you just want them all to swallow the koolaid. None of them are redeemable. Meanwhile, Mr. Campbell (Charlie Day) is trying to not get fired and keep his fellow teachers from not being fired as well, which is the catalyst for his fight with the hot-tempered Mr. Strickland. The side story here is that Mr. Campbell needs to learn to confront people and speak his mind and to not be walked all over, while Mr. Strickland needs to be more level-headed.

This could’ve been a fun movie with a decent message, but when teachers are being sprayed in the face with paint or when the kids inject a live horse with meth to run around the school, all bets are off. It’s a dumb movie that could’ve been much better. Still, it’s great to see Charlie Day play the straight and narrow guy once in a while, while Ice Cube is always fun to watch on screen and owns every second of it. There are a handful of supporting cameo roles here, but none of them add any substance to the movie. 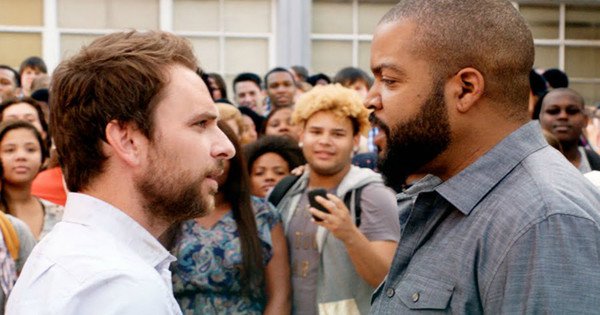 The Video: Fist Fight comes with a great 1080p HD transfer and is presented in 1.85:1 aspect ratio. The film itself might not be a winner, but this video presentation definitely is. The detail is sharp and vivid throughout, showing every individual facial hair, pore, cut, and wound on the actor’s faces. Wider shots of the high school show all of the dings and broken wall tiles and scuff marks nicely. No shot ever goes soft, even in the heavier CGI scene at the end of the film where the whole school is indeed watching the fight.

Colors pop off screen at all times, and are bright and well-saturated. All primary colors look well balanced and realistic. This is a very colorful film that takes place on a sunny day, so there are no real dark spots here. Black levels are deep and inky and the skin tones are natural. There are no compression issues to speak of either, leaving this video presentation with great marks.

The Audio: This release comes with a good lossless DTS-HD MA 5.1 mix and sounds good for being a comedy film with some elements of mild action. Sound effects are robust and full, but never overly loud, and I wouldn’t go as far to say that every punch or kick packs a big hit, but sounds good enough. Ambient noises of kids walking in the halls, yelling at one another, things being thrown, and school bells all sounds great with  excellent directionality, providing a solid soundscape inside the school halls.

The fight scene is where the soundtrack shines here with a great low end that brings the bass without crossing into rocky territory and with all the sound effects adding an immersive experience. Dialogue is always clear and easy to follow and free of any pops, cracks, hiss, and shrills. 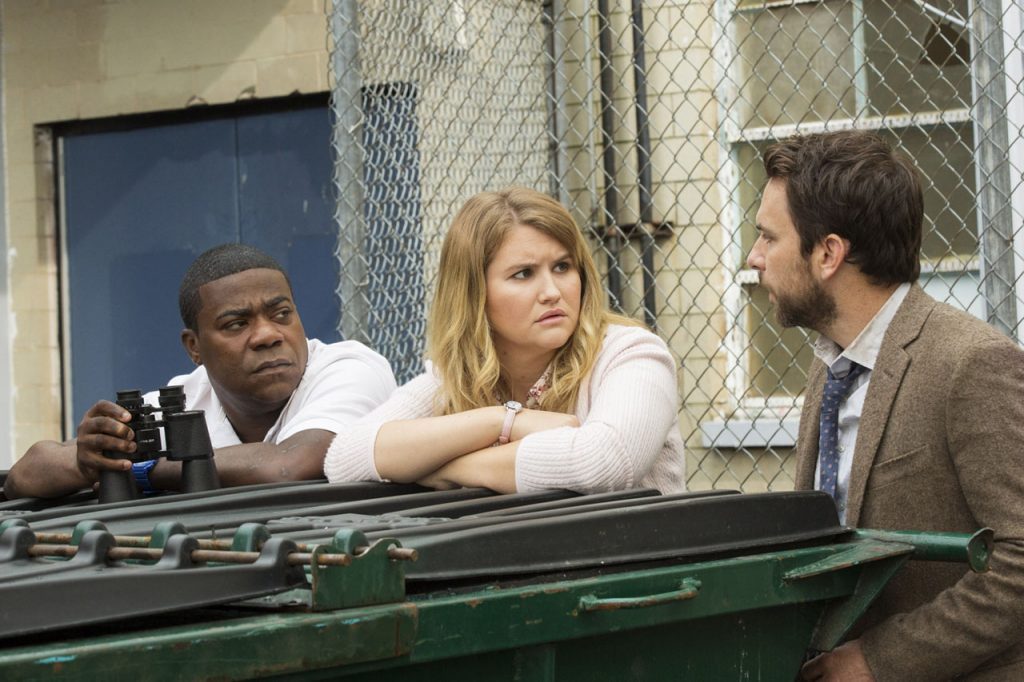 Deleted Scenes (HD, 16 Mins.) – Mostly extended scenes here, none of which are worth watching really. The last segment here is a few seconds of outtakes.

Georgia Film Commission (HD, 2 Mins.) – The filmmakers talk about how much they love filming in Georgia with some spliced in behind the scenes footage. 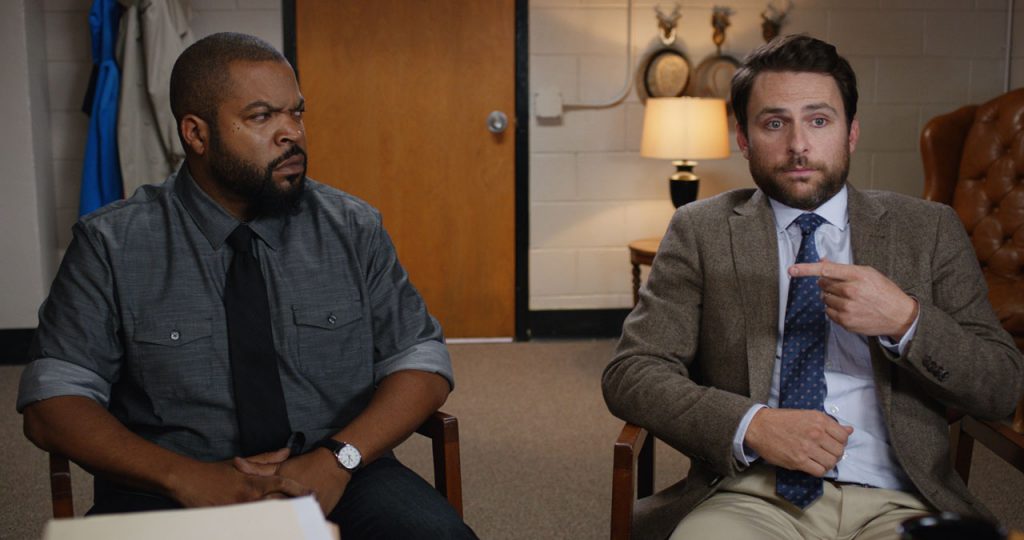 Fist Fight is a terrible film with two great actors in the lead. It’s just a shame that the script was horrible and not funny on any level. It’s obvious that the filmmakers wanted to relay a message on our current school system here, but it’s all lost on the silly humor and terrible dialogue throughout the film. The video and audio presentations are quite good though and the lack of extras aren’t watchable either. If you’re curious or love Charlie Day and Ice Cube, give it a quick rent or wait for Netflix.