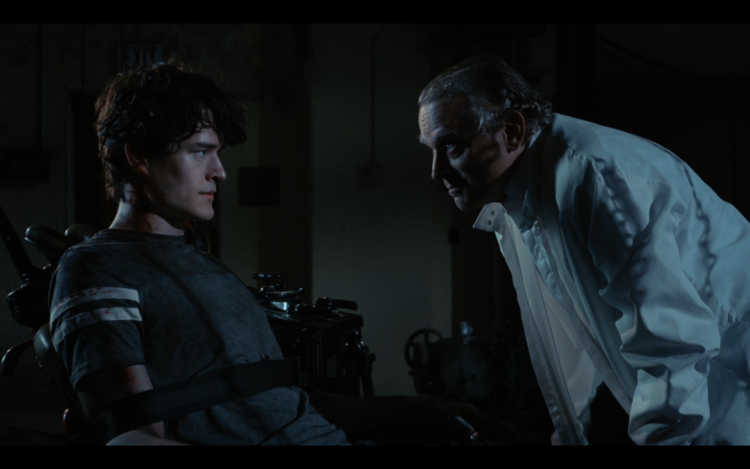 Within the bowels of an insane asylum, Jack (Ross Destiche), Vanessa (Jenna Enemy), Grant (Justen Jones), Corey (Shane Philip), and Jaime (Kodi Saint Angelo), are five somewhat friends and are desperately seeking a way out. Having been drugged at a party and dumped there, the group does not know who has trapped them or who is pursuing them. Jack, who recently suffered the loss of his sister and even attempted to commit suicide, has no trust within or without. Vanessa, shunned by most, desperately wants to belong but does not want to appear vulnerable. The rest of the group is just annoying and scatter-brained characters with no real backstory. The genius that is Brad Dourif returns as a mad scientist, Dr. Broward, seeking a path to the unknown. Inside The Control Group, this test group experiment, what will they all find?

It is always good to see Dourif in a film. He knows how to play twisted well. Dourif presents a solid performance as a scrupulous doctor. Like most people, I have enjoyed his work since seeing him in Child’s Play and other films like One Flew Over the Cuckoo’s Nest, Dune, Body Parts, and Alien: Resurrection. Good guy or a bad guy, you’ll love his acting. The rest of the cast is completely unknown to me. Performances were just not believable; so it was difficult to sit through this film. Dialogue was mumbled, stumbled through, or blown out of proportion in each moment, which came across laughable and silly. Needless to say, most of the dialogue did not impact the story whatsoever.

The special effects were cheap, unpolished, and over-the-top. Neon electricity is unnecessary to show electrocution, but it’s on display all over the place here. Images of the old Power Rangers TV show from the 90s filled my head due to the amateur quality of the effects. Editing was a challenge for this film as well. For example, when a guard’s fingers were broken back in one frame, we see the same fingers perfectly straight again in the next frame. The lack of realism during torture made it less of a threat too. The film is less then an hour and a half long and it did not go by fast enough. The Control Group will be released on V.O.D. this week. Brave it, if you dare. I love horror films but this one didn’t even give me a tingling in my toes.