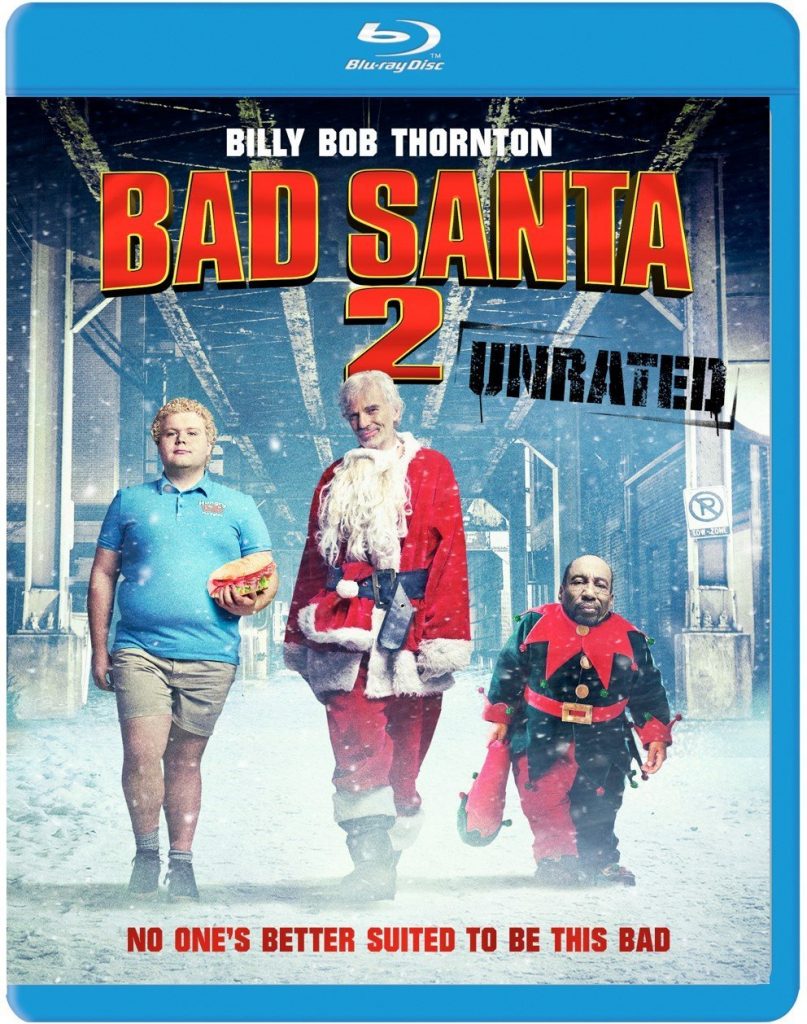 Back in 2003, we got a different kind of Christmas movie with ‘Bad Santa‘. It was full of vulgarity, sex, drugs, and alcohol. Not exactly your typical holiday spirit Christmas film. However, it was damn funny with some excellent witty dialogue and even had a bit of heart and soul to it, and cemented Billy Bob Thorton’s anti-hero Santa into cult status. If your new to the ‘Bad Santa‘ story, it follows a bank robbing duo who dress up as Santa and his elf and rob department stores on Christmas.

Not sure why we needed a sequel as the first film said all it needed to say, but since it made more than triple its budget, the movie studio decided to give it a sequel thirteen years later. Did this sequel need to happen? No. Is it any good? It’s damn funny and entertaining enough, but lacks the heart of the first film and feels like hilarious one liner to the next hilarious one liner for the entire duration of the movie.

Set thirteen years later, Willie’s (Billy Bob Thorton) life has not panned out as he had hoped after the events of the first film. He is alone, depressed and tries to kill himself often, but fails. The kid Thurman Merman from the first film shows up, now 21 and still loves Willie like a father, delivers him a sandwich with money. Turns out the money us from Willie’s former small partner Marcus (Tony Cox), who wants to apologize to Willie for betraying him and work on another job together. Willie reluctantly agrees when he finds out that his mother (Kathy Bates) is involved too. From here on out, it’s business as usual and follows the same plot as the first film. Willie even gets a new girlfriend in the beautiful Christina Hendricks, who is hilarious here.

I suppose the side story in this film is Willie forgiving his mother for treating him so badly as a kid, and in turn Willie being better to Thurman. It sounds good on paper, but is not executed in the best of ways. Instead, this is a film full of hilarious, vulgar dialogue that is still funny on multiple viewings. I doubt there will be more sequels, since ‘Bad Santa 2‘ was critically panned and didn’t meet its budget in gross receipts, but we can still laugh with Billy Bob Thorton as Willie, because he is fantastic, as is Tony Cox in every scene. You can tell everyone had a good time onscreen and laughed quite a bit. It’s just unfotunate ‘Bad Santa 2‘ lacked the depth the first film had.

The Video: ‘Bad Santa 2‘ comes with a 1080p HD transfer and is presented in 1.85:1 aspect ratio. This digitally shot film looks very good, but has some small issues. The digitally shot feature provides some good detail, but lacks depth in wider shots with some smoother facial features. Still, the rough looking facial hairs on the actor’s faces and big threads in the Santa suit looks great and pops. Colors look a tiny bit saturated on the high level, but that brings out the reds and green more in this holiday film. The browns and yellows in the gross bathrooms and bars look great too. Black levels are deep and inky, and the skin tones are natural. There was some evidence of video noise, but other than that, no other compression issues are present. This video presentation is solid.

The Audio: This release comes with a lossless DTS-HD MA 5.1 mix and does a great job for being a mostly dialogue driven comedy film. The sound effects are robust, but never overbearing. Ambient noises of the bustling city life and people talking sound great in the rear speakers. The music always adds to the comedy of each scene as well. There isn’t much of a low end with bass, but when it happens, it never crosses into rocky territory. Dialogue is clear and easy to follow, and free of any pops, cracks, hiss, and shrills with good directionality. Needless to say, this is a solid audio presentation for a comedy film. 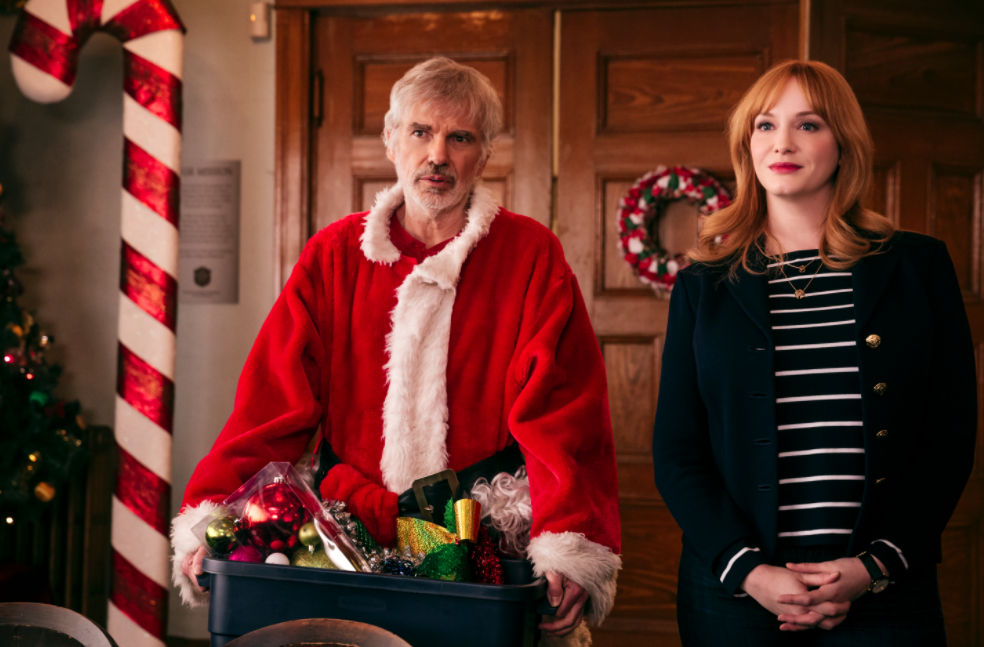 ‘Bad Santa 2‘ has a theatrical version and an Unrated version to choose from. The difference is about two minutes of extra footage, meaning there isn’t anything of real value from the Unrated version.

Thurman Then and Now (HD, 3 Mins.) – This is a look at the actor who played Thurman and how much he’s grown up from the first film.

Just Your Average Red Band Featurette (HD, 2 Mins.) – A funny little piece that talks about the vulgarity of the film. 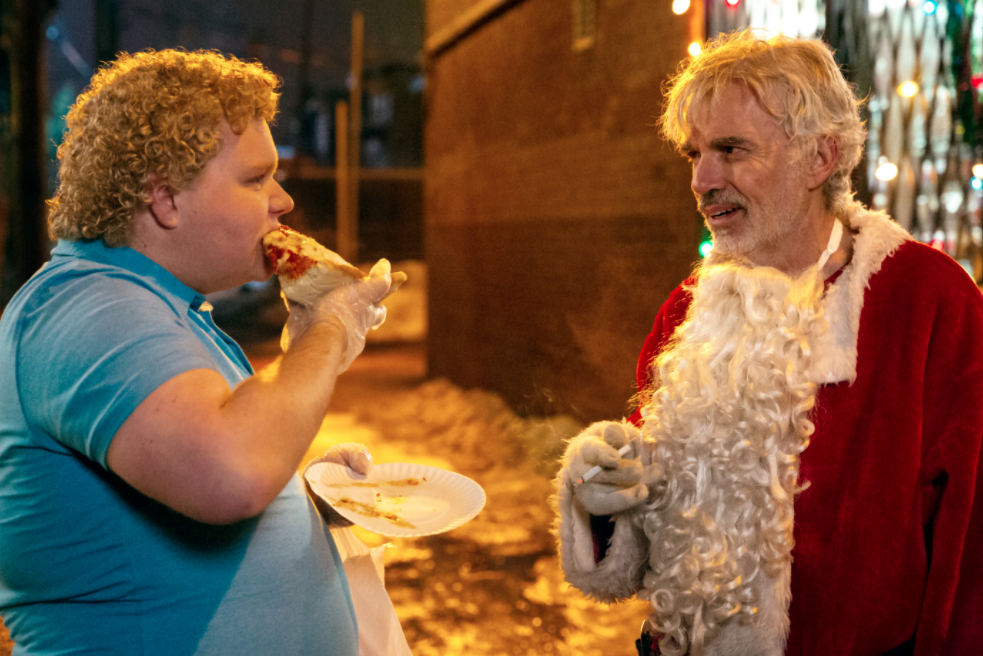 ‘Bad Santa 2‘ is damn funny. The dialogue is spot on, vulgar, and highly entertaining. The performances are great too throughout. However, this sequel lacks the heart and soul that the first film had. It’s not a great sequel, but it isn’t a bad one either. The video and audio presentations are both decent, and the extras are fun enough, if not very short. This one is for Fans Only.