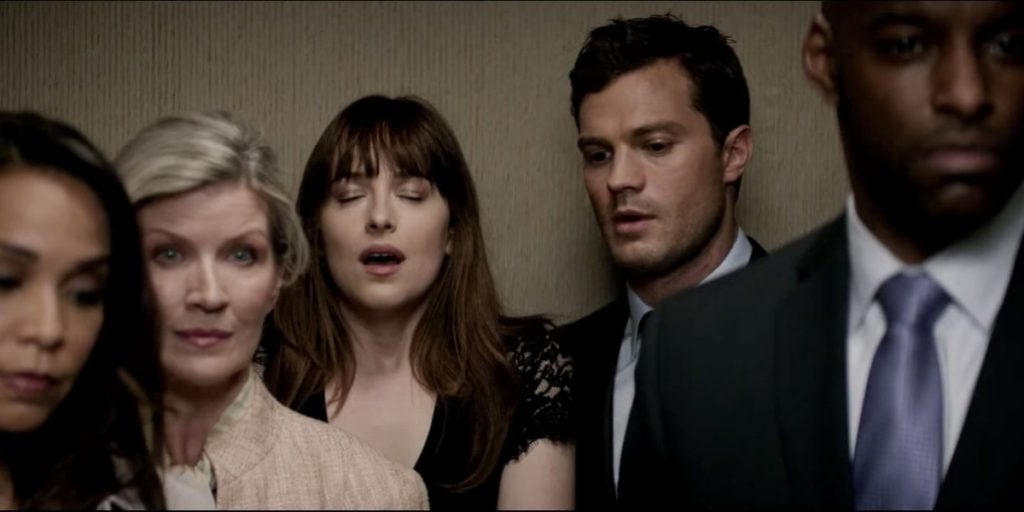 Anastasia Steele (Dakota Johnson), a once sexual novice, returns as a dominant carnal powerhouse. In quite the role reversal, Christian Grey (Jamie Dornan) transformed into a whimpering little drug addict turned kid in a candy store. Before watching Fifty Shades of Grey, I had not read the novels pinned by E.L. James, not this time. I have listened to all four books (yes, Grey is the 4th, for those not in the know, loved the different perspective it offered). Although the production colored within the lines for the most part, the picture was a bleeding watercolor instead of a vibrant oil.

Right along with the novel, Fifty Shades Darker opens with the past. We pop briefly in and out of Christian’s childhood, the source of his torment. I say “pop,” because it describes everything in the production. Brief pop-ins of relationships outside of Ana and Christian as well as a cornucopia of rushed sexual escapades. Clearly James Foley, the new director, delights in quantity more than quality. One of the issues I had with Fifty Shades of Grey was the speed of the narrative’s progression. Can we find a happy median pace? The ample material is intriguing, but its execution was handled like a preemie (yes, as in premature ejaculation). After all, delayed gratification can be delicious. Perhaps, don’t be mad at me for saying, this book should have been a two parter, release now and in the fall (would help us die hards endure the year long wait for the final film). Rushing through the moments needlessly robbed Fifty Shades Darker of its intensity. Give us time to feel the event, dark as well as sexy, before yanking us to the next plot point. Sam Taylor-Johnson did a better job of capturing the intense passion and reveals of its predecessor. Especially with the sex scenes, such a sexually well-educated and experienced man like Christian would use more than the vanilla missionary position over and over. You can tell a man directed this one.

Dornan, who I loved in The Fall, unless I’m mistaken (and I’m not) became more irresistible along with insatiable. The theater ringed with hoops and hollers at the head-to-toe side/rear view of him in one scene. Yowzers! Johnson, granddaughter of the legendary Tippi Hedren, did a nice little homage to her mother’s, Melanie Griffith, role in Working Girl. Kim Bassinger‘s Elena Lincoln was weak and unconvincing. Elena is not a beggar. She’s supposed to be a Dom! I guess it is not much of a surprise because I cannot recall her ever playing such a strong role, always the damsel in distress Batman or the shy, hot chick 9 ½ Weeks. Even the Jack Hyde (Eric Johnson) character wasn’t very realistic. His character nose-dived too quickly. Not much experience of with Johnson’s work, but I did like his wild performance of Teenage Tristan (Brad Pitt character) in Legends of the Fall. I really like Marcia Gay Harden’s performance. It would have been preferable to see a punch instead of a slap in Harden’s Mama Bear protection scene (watch it, you’ll see what I mean), again, lack of intensity.

A wonderful nugget of the first film did not carry over well; the musical score, which was on point in the first was slow to connect to the narrative in this second chapter. The set design, although somewhat similar, had noticeable aesthetic changes in the color scheme, Christian’s apartment, text message windows, even the setup of the “red room of pain.” Why? Lost the lease on the other set? The time span before pictures doesn’t justify the changes. Then I realized Fifty Shades Darker also had a new production designer, Nelson Coates, so oh well. The tone of Fifty Shades Darker is light and playful which contradicts its title and the feel of the book. Even the title sequence felt wrong, light and white roses, come on? The villains were simply not very threatening part of which was the distance away from their evil deeds. A few key close-ups and/or off angle shots would have helped the scare factor. This film should have been transitional. Christian showed complete surrender without obstacle at the very beginning. For fans that desired more sexual content, you will be appeased with the frequency (true honeymoon phase of the relationship).

Overall, despite its flaws, I recommend Fifty Shades Darker. Yeah, the film nerd in me dissected it a bit too much here. I have great appreciation for this story, so, of course, I care how it is presented. The opulence of Fifty Shades Darker makes it exceptionally pleasurable.