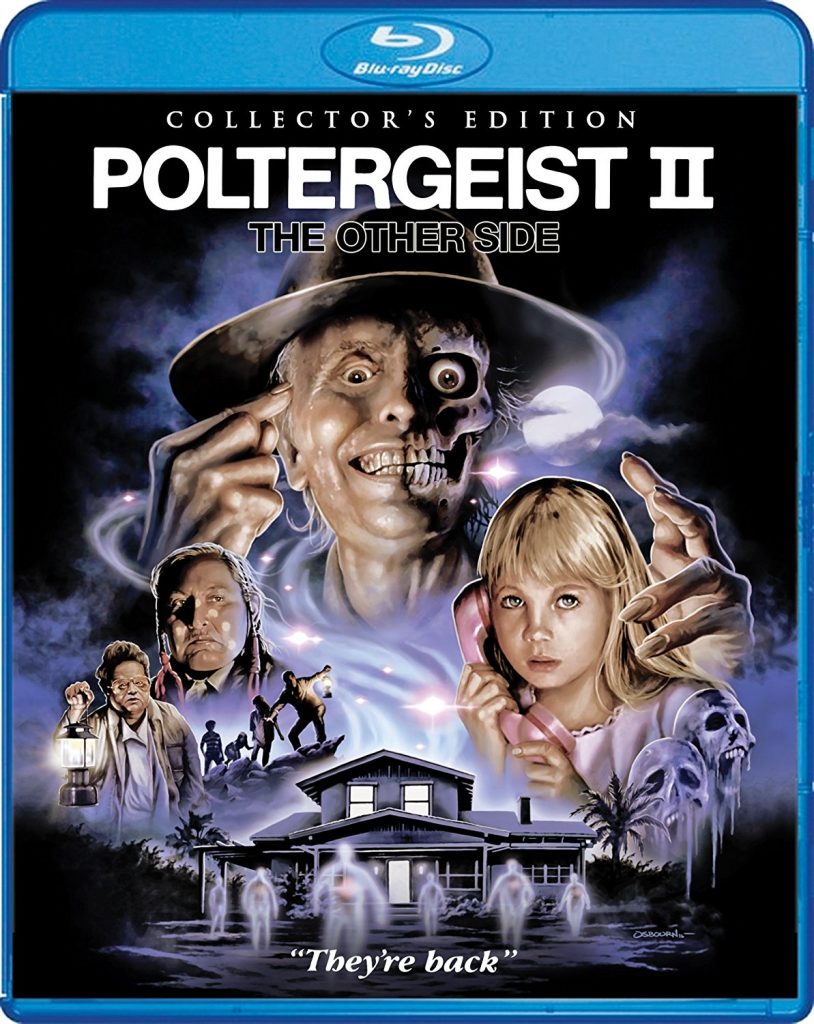 It’s hard to compete with the first ‘Poltergeist‘ film. You had Steven Spielberg and Tobe Hooper behind the scenes there with an excellent mix of straight out horror and comedy. You would be laughing at Craig T. Nelson sucking in his stomach in front of the mirror one minute, and scared to piss and back at the clown doll attacking little Robbie. It was simply perfect in every way. Some four years later, the studio decided to make a sequel since the first film did so well critically and financially, and it was called ‘Poltergeist II: The Other Side‘.

However, they didn’t bring back Spielberg or Hooper, but got some nobody to direct. They did bring back two of the co-writers of the first film though, which gave this sequel some decent scenes, however, it seemed to miss the mark by a bit. This sequel wants to go into a different direction by adding a bigger native American element, but still managed to produce very similar horror scenes from the first film.

After the events of the first movie, the Freeling family move to Diane’s mother’s house to stay until they get back on their feet sans a television and their oldest daughter Dana. The evil beast from the first film has taken the form of a creepy old man by the name of Rev. Henry Kane and is looking to wreak havoc on the Freeling family once again, particularly in taking Carol Anne back to the other world. Tangina comes back with help from a native American friend named Taylor (Will Sampson from ‘One Flew Over the Cuckoo’s Nest‘), who helps the Freelings deal with ghosts, poltergeists, and Rev. Henry Kane. This film was set in the glory days of practical effects, so all of the monsters and visual effects are all real, which can look equally great and terrible.

From Craig T. Nelson puking up a giant slimy monster worm to Robbie being attacked by his braces, things get a little silly, but there are still some horrifying moments, especially when the Rev. Henry Kane is involved who is played by the incredible Julian Beck. He just oozes the creep factor all over the place. This film plays out more or less the same way the first film does, but still manages to conjure up the entertainment value in most places. ‘Poltergeist II‘ was nominated for and Oscar as well as a Razzie, which pretty much sums up the movie. Great and terrible all at the same time.

The Video: This new Collector’s Edition of ‘Poltergeist II‘ comes with an excellent 1080p HD transfer from a brand new 2K scan of the interpositive and is presented in 2.35:1 aspect ratio. The previous Blu-ray that was released had a much warmer and brighter tone to the film, which seemed a bit off. This looks like it has the right color correction finally done to it, giving the image a much more sinister and cooler aspect to it. There is a nice layer of grain to keep the filmic aspect alive here as well. Colors pop off screen, especially in the garden with all of the colorful flowers. Detail is sharp and vivid with individual hairs on the actor’s faces showing up nicely as well as every fun practical effect in the monsters. Black levels are deep and inky and the skin tones are natural here too. There were some instances of some scratches and debris from the old print, but it’s rare and never takes away from the overall picture, leaving this video presentation with great marks.

The Audio: This release comes with both a lossless DTS-HD MA 5.1 mix and a DTS-HD 2.0 mix. The 5.1 has a bit more heft to it with the surrounds and the subwoofer that provides a little bit of bass, but not as much as you’d think with this horror film. Sound effects are mostly full and loud, but have some soft aspects to it. Ambient noises of all the creepy and haunting sounds come out from the rear speakers, but again, not as much as you’d expect. In fact, this is rather a front heavy mix. The score always adds to the suspense of the film, as well as that famous score that we came to love from the original. Dialogue is clear and easy to follow, but has a couple of cracks throughout, but no hiss, or shrills are heard. This is a decent audio presentation.

Audio Commentary #1 – Writer and producer Michael Grais talks with an interviewer and answers questions about the film as the movie plays. There are some excellent stories on the production and casting for the film, as well as some mistakes that were made throughout filming. This is a fun commentary track and very informative.

Audio Commentary #2 – The ‘Poltergeist’ fan website owner David Furtney talks about a ton of trivia and production notes, stories, and characters from the film. Furtney isn’t the most energetic of talkers, but there is some good info here.

Robbie’s Return (HD, 14 Mins.) – Actor Oliver Robins, who plays Robbie in the film, has a present day interview and discusses his time on set, working with everyone, and going through the special effects.

The Spirit World (HD, 22 Mins.) – This is an AWESOME extra with present day interviews with the special effects team Richard Edlund, Steve Johnson, and Screaming Mad George, where they discuss how they did all the cool visual practical effects and some mistakes that made it to the final film. So much  fun.

Ghosts of Giger (HD, 21 Mins.) – H.R. Giger contributed to this film in the form of some of the creature designs and more. His friend and agent Les Barany talks about his time on the film and his work.

They’re Back: The Making of ‘Poltergeist II’ (HD, 6 Mins.) – Here is a vintage behind the scenes EPK piece with cast and crew interviews, along with on set footage that shows some of the bigger scenes and how they were done.

Monster Shop (HD, 3 Mins.) – Yet another vintage extra that talks more in depth on all of the visual effects and monsters in the film.

Ghost Makers (HD, 6 Mins.) – More vintage extras where the cast and crew talk more about the visual effects and how they were made with some on set footage.

Still Gallery (HD, 6 Mins.) – Tons of production photos and posters from the film are here.

‘Poltergeist II’ Script (HD, 10 Mins.) – Here is the full script from the film that you can view page by page.

‘Poltergeist II‘ is a fun movie. It has some silly moments, but it also has some very terrifying moments as well. This is a solid sequel, but of course, nothing will hold up to the original film with the amazing talent behind that. Still, everyone came back for this film, and it’s worth seeing. The video and audio presentations are damn good and the many extras are all worth watching and listening to.