The Ultimate ‘Andre The Giant’ Documentary Is Finally Happening!

Finally, the ‘Andre the Giant‘ documentary that we’ve always wanted is happening with WWE, HBO, and Bill Simmons, which is a hell of a production team right there. This will be a feature length documentary about the wrestling superstar that brought the pro-wrestling business into the big spotlight. Andre Roussimoff was 7’4 and weighed 500 pounds and was one of the biggest names in wrestling. He’s still talked about today. Roussimoff was born in France in 1946 and started wrestling at age 17. He went to Japan, which caught the likes of Vince McMahon Sr. who then signed him to the WWE brand.

From there, Andre almost never lost as he battled Jake the Snake, Macho Man, Ultimate Warrior, and Hulk Hogan. If you remember, Wrestlemania 3 was where Hogan body slammed Andre, which is one of the most remarkable things in wrestling history at the time. Andre was a force of nature and was adored by everyone. Anybody who came into contact with him instantly fell in love with him and have numerous stories about him, which hopefully will be put into this documentary. Andre was also the first inductee into the WWE Hall of Fame and is fondly remembered today across the globe. During and after his wrestling career, Andre turned to acting. 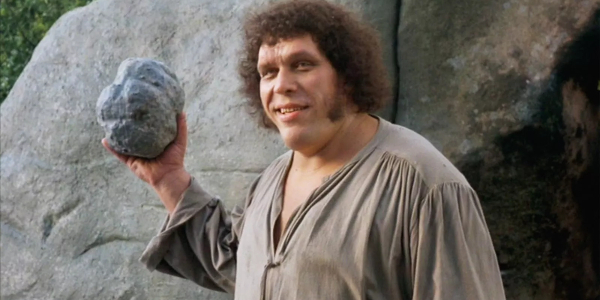 He played the lovable Fezzik in Rob Reiner’s ‘The Princess Bride’ and was even in ‘The Goonies’ music video for Cyndi Lauper’s ‘Good Enough‘. We all loved the guy, so I’m glad we are finally getting a great documentary about him done by the good folks at HBO and WWE. Emmy winner Jason Hehir will direct the documentary.“Going back to 2007 and 2008 when I was creating and developing 30 for 30 for ESPN, Andre’s story rode the top of every single sports documentary wish list I ever made,” said Simmons, who will executive produce the film. “We always hear about unicorns these days; Andre was the ultimate unicorn. He’s a true legend. Everyone who ever crossed paths with him has an Andre story – and usually four or five.”

“For more than 20 years, Andre the Giant’s larger-than-life personality and unique charisma captured the imagination of fans around the world,” WWE Chairman & CEO Vince McMahon said.  “I will always value our friendship and am proud to tell his story.” This might turn out to be my favorite documentary.