Film Review: ‘We Are the Flesh’! 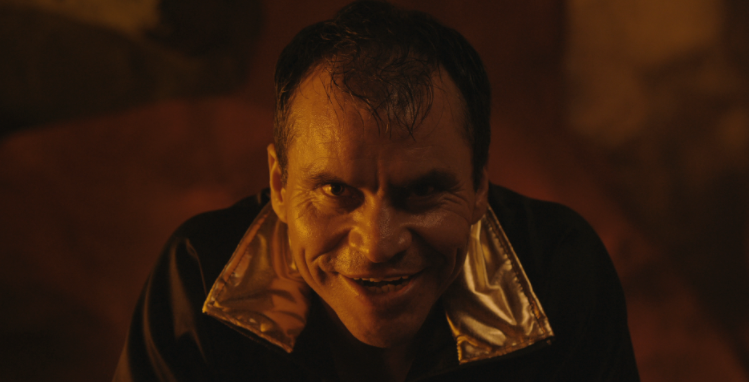 Filmmaker Emiliano Rocha Minter has certainly cemented his name in the annals of art house horror and sexual fantasy cinema with his Spanish film ‘We Are The Flesh‘. Standing in the same room with films of Gaspar Noe (‘Irreversible‘, ‘Enter The Void‘), John Waters (‘Pink Flamingos‘), and dare I even say Pier Paolo Pasolini (‘Salo: 120 Days of Sodom‘), ‘We Are The Flesh‘ takes a very violent and sexual look into a surreal apocalyptic scenario in something that you’ve never really seen before. For all of its taboo subjects that it has no problems or apologies for showing on screen, sometimes which is up close and personal, Minter gives a very Kubrick-esque look at this bizarre story.

It’s fairly hard to find the plot here, as we focus on an older man (Noé Hernández) who would give the boogeyman the creeps. This man is obsessed with building something out of cardboard and tape, when two teenage siblings enter the dilapidated building he’s residing in. He agrees to let them stay in turn for helping him build what looks like to be a cave to hell. Also, he has them act out explicits sexual acts on each other. There is no real idea as to what’s happening outside this building, but it’s alluded that there is a war or apocalypse of some sort and that this old man is providing his own version of a perverted salvation, which delves deeper into a sadistic abyss of torture, death, and sex.

The teenagers are great here, but Noé Hernández is unbelievably scary and excellent on film. I’ve never seen anything like it before in a performance. People who are looking for something soft and kind or if they feel like they are seasoned gore hounds might even find this film a bit disturbing. However, Minter doesn’t mess about with the super gory shots or quick cuts. Instead, he takes his camera into an unflinching and unescapable place where we the audience are forced to watch everything that happens on screen in a sort of filter-colored hypnotic nightmare that only gets worse as time goes on.

‘We Are The Flesh‘ is a slow burn film. It’s one that pushes the bounds of taste and art, but in that good way in that you want to see more from this filmmaker. People in the independent film industry should take note of Emiliano Rocha Minter, because he has a beautiful eye for film and has something to say.