Remember what it was like to dream? I’m not referring to our current dreams of better jobs, or more money, or a new car, but dreaming without restriction? As a kid, I dreamed several times of experiencing that bicycle flight in front of the moon with E.T. at the helm. I dreamed of discovering pirate gold and sneaking a kiss from my older brother’s girl like Mikey. I sat in spaceships and fighter jets made of cardboard boxes. I gave life and personality to a slew of GI Joe’s, even little green army men with no functional limbs. I dreamed. There was no lack of depth to those dreams. No impending Trump administration. No knowledge that the guns used for pretend are replicates of actual war machines taking lives every single day. My simple imagination was rampant without knowing otherwise, but I grew up.

This morning, for a little less than a few hours, I revisited my childhood vicariously through my three-year old son. We went to a screening of Monster Trucks. As with most things, seeing a child experience almost anything is incredible, everything from innocence and wonder to fear and joy. I was excited for him to see a movie that would have been on par with something that inspired my imagination as a kid. Beyond the alluded to E.T. and The Goonies, the list of fantastical movies that took me to other places were Little Monsters, Monster Squad, the shrinking kids franchise(?), Ghostbusters, The Neverending Story, Mac and Me, and on and on. (I know I’m not alone with many, if not all, of those.) I’m not saying this movie is going to be a cult-classic by any means; it was, though, an escape from the bounds of my daily 8-5 and going home to attend to bill-paying – real life in general. I joked with a friend prior to the movie about how terrible it looked, but as I sat there, shushing my kid as he yelled out in excitement about the things he saw, I thought of something. Who sees a movie about a monster taking the place of an engine and expects it to fit the grown-up term of “good”? Realizing that, I sat back and enjoyed the story to follow. 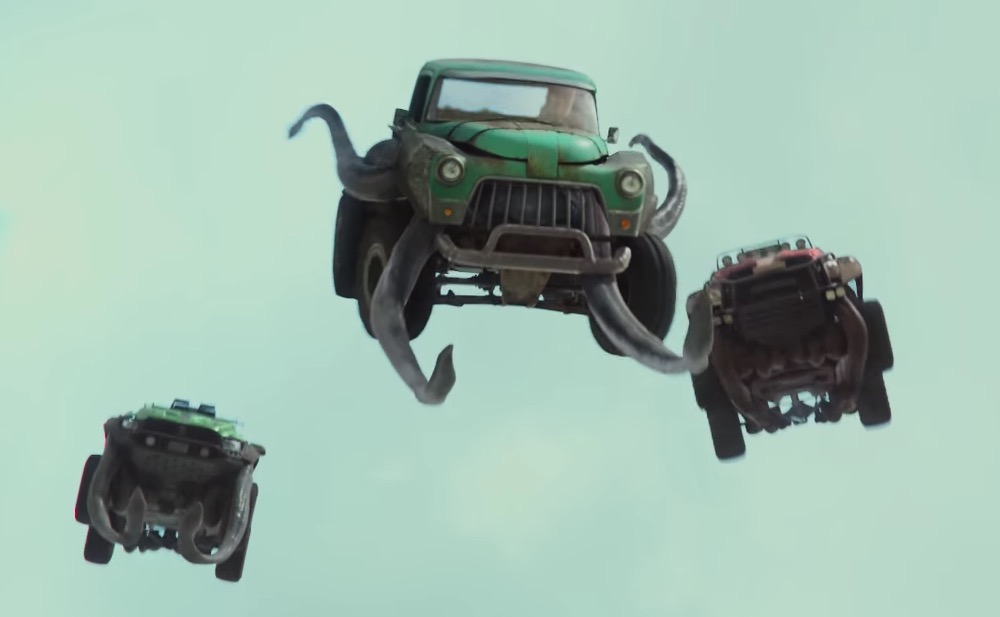 An oil and gas company called Terravex, run by Reece Tenneson (Rob Lowe of Tommy Boy and those dreams you’re afraid to telling anyone about) with his lead scientist and conspirator, Jim Down (Thomas Lennon of short shorts famed on Reno 911), uncovers an underground eco-system when they beginning drilling through a system of rivers below the surface. Refusing to adhere to environmental law, Tenneson pushes for his team to continue drilling, leading to an explosion and a group of octopus-like creatures going awol from their home below the Earth. So as to not give away news of their negligence, they contain two of the creatures, not realizing a third had escaped as well. The third took refuge inside of a truck crushed amongst the wreckage and later to be sent off for scrap.

We go on to meet our protagonist, Tripp, played by Lucas Till (Havok of the revamped X-Men and CBS’ new, lesser MacGuyver) and pursued by a fellow classmate and tutor with some of that good girl appeal, Meredith (Jane Levy of Suburgatory and Evil Dead). Tripp is a bit of a loner and reject of sorts. HIs dad is absent, and his stepdad, played by Barry Pepper, is a gentleman named “Sheriff Rick”, who really needs no other description than such a name. (Think Dewey from the Scream franchise but with a little twang to the accent.) Naturally, his roguish ways conflict with Meredith’s goody-goodines, but she stays on the trail, later to enjoy the adventure as a partner in crime.

As most hormonal, irrational teenagers do, Tripp works at a junkyard owned by Mr. Weathers (Lethal Weapon’s own Danny Glover), where he operates a car crusher. Again, typical kid… It’s there that he has a chance encounter with the the third creature, relocated to the junkyard via the crushed Terravex truck. A single night of fear is followed by the evolution of confusion to friendship, as Tripp finds out this thing feeds on oil and can propel the engine-less truck he’s been putting together bit by bit with pieces from the boneyard. When Terravex gets wind of the [now] possible third creature on the loose, Tenneson sends his thugs to track matters down to the junkyard, confronting Tripp. Dodging an interrogation, Tripp runs into Meredith, who has hunted him down at work for a tutor session, and they end up at her family ranch, where Tripp and the monster spend the night in a seldom-visited barn. Overnight Tripp decks out his truck and learns the way of his new tentacle-y friend, even going so far as to nickname him, “Creech”. It’s at this point the chase begins as Tripp, Meredith, and Creech seek to evade these evil contractors.

The chase is quite impressive. Tripp has outfitted his truck with everything he needs to make a getaway at anytime. This leads to giving Creech a shot of gasoline, which is the equivalent of NOS oh-so utilized within the Fast & Furious genre, given the additional chemicals added to oil, as he pulls up the wheel to lead the truck into an ollie of sorts. With a flip of a switch, the fenders raise up at a dead end to allow Creech’s tentacles to climb a wall, where the chase continues as the truck jumps from roof to roof, which includes heavy CGI. (I’m not sure why they couldn’t just film the creature actually doing this, but I guess it need a break. Union laws, right?) The day ends with them taking refuge at Meredith’s family cabin, which is seldom used, and where a little connections spurs up between our hero and heroine. There’s no kissing though. This is PG, folks. You gotta leave enough space for Creech. 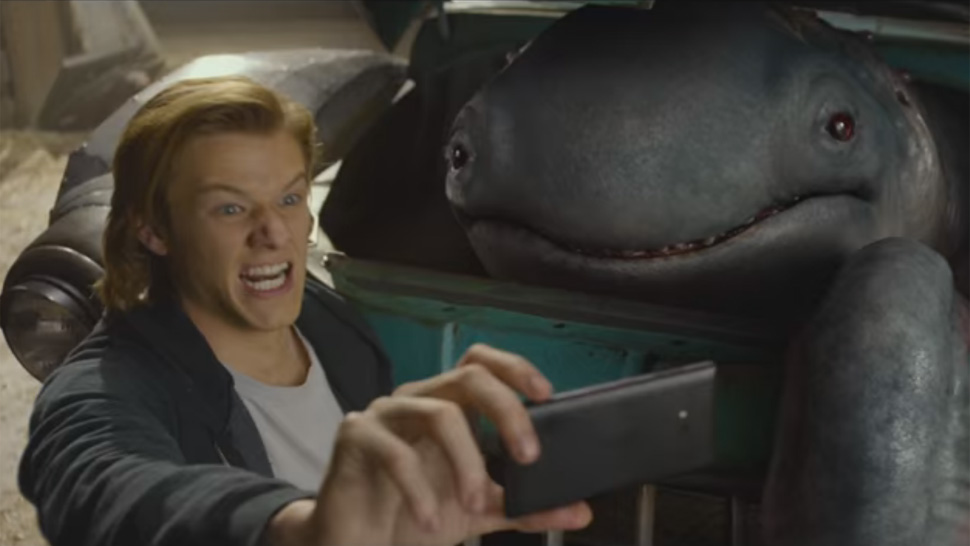 It’s about this time that we see some friction arise between Tenneson and Dowd, as Tenneson wants the oil and the money, which will involve killing off the new life they’ve found, but Dowd has found a fascination with the creatures. They show a hive intelligence, where what one learns the others pickup within moments. They even play a little bit of Simon, and subsequent Blind Simon. Regardless, Tenneson orders the vent to the system of rivers to be poisoned, so trucks are sent. Having gotten a sense of his creatures in cohorts’ danger, Creech abandons Tripp and Meredith overnight to find his family. This only leads to his imprisonment and doomed future as well. Our two, new possible love-birds catch up with the action at Terravex, where they’re bullied by Tenneson and escorted away after having their phones wiped of any recollection of the creatures.

About this time, Dowd intercepts the escort to “rally the troops”, the three of them, to rescue the creatures and intervene in the poisoning agenda. They steal the truck carrying the three creatures and head off to a car dealership where Mr. Weathers and Tripp’s high school friend/admirer help to build a second and third truck to house the monsters. You may find it odd, but here I’m NOW going to point out the absurdity of the film, as the two additional trucks they customize look like Xzibit and West Coast Customs rolled-in to join in the 12-hour effort. But hey, family movie. The squid-like friends mount up in their new wagons, and they begin to make their way to their home with Tripp, Meredith, and Dowd at the wheel. 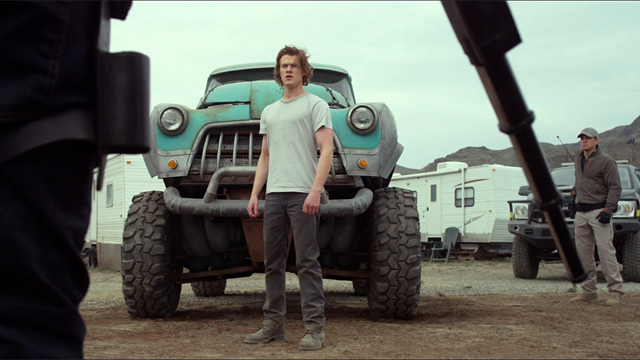 As you can assume, one does not simply walk into Mordor, so much the same, these guys don’t just make it to the vent without issue. Another chase begins but this time with three trucks and an armada murdered out Terravex contractors nipping at their bumpers. We see flips and explosions and jumps and Dowd puke on himself. (Everyone in the theater laughed at that (‘murica!), but my kid just remained stoic; I guess we’re not there yet. #lifegoals) Our slimy and unlikely heroes get cornered while driving through the mountains but not for long as good ole Sheriff Rick comes to the rescue, driving one of the biggest dump trucks, or I should say “earth movers”, I’ve ever seen. This gets our team to the final stretch where they find the poisoning has already commenced, but don’t worry – again, family movie – good vibes will overcome. Good ole Creech steps it up with our boy Tripp at the wheel, and through some Jackie-Chan-like not-Jackie-Chan-like-because-it’s-a-truck-not-a-human action, the well is destroyed before the poison is fully released. It’s there we bid a sweet, fair adieu to our friendly creatures from below, and Tripp is faced with saying, “Goodbye.”, to one of the only friends he’s ever known. Don’t worry, though; he makes good with Sheriff Rick and rides off into the sunset with Meredith, his tutor and now solidified boo. As they say: come for the octopus; stay for the girl.

Should you choose to watch this movie, go with judgmental eyes, if you’d like. Go with a critical mind, if you want. But if you have a heart, then simple remember that. This is a movie where an octopus replaces the engine of a truck. Also, as I’ve warned you, they pimp out two hillbilly rides within a matter of hours overnight. If you set your expectations too high, which I’d doubt you would, you’ll be pretty disappointed. After all, no kid wants to or needs to see Sonny Corleone get gunned down, so you won’t find the likes of that in a family movie. That’s grown up stuff, where real life is real life. Take the opportunity to see this and try to remember what it was like to do as I mentioned, dream. Imagine and have fun; otherwise, go watch the documentary, Idiocracy, and call it a day. Enjoy your real life while I enjoy my creature-driven-trucks-jumping-trains-like movies. *Pops in Home Alone 9*

Recommended if you are or can be a kid…. or are on acid.