If you were are a fan of ‘Scandal‘ or ‘The Newsroom‘, you’ll probably enjoy ‘Miss Sloane‘. This drama/thriller, directed by John Madden, was a quick paced, banter filled, unique look into the underbelly of D.C. lobbyists. At moments it’s fun, at others it’s tense, at then at times it attempts to be harrowing. The film, while leaning left, has a little something for everyone in my opinion.

Consider yourself warned that the main character, Elizabeth Sloane (played by the lovely Jessica Chastain), jumps ship from a conservative lobby firm and then works tirelessly to take down the gun lobby any way she can while trying to pass an anti-gun bill in the senate. My warning is only out there so you can’t say there wasn’t one, but my conservative companion found the acting enjoyable – so get over yourself, go, and enjoy.

Jessica Chastain plays Miss Sloane well. She’s calculated, cunning and always one step ahead. But like any hero or heroine, there’s always a flaw. She’s obsessed with winning and keeps herself running full steam ahead even when her mind and body are begging to slow down. She perfectly plays the woman who has sacrificed all notions of a normal life to gain ground professionally. 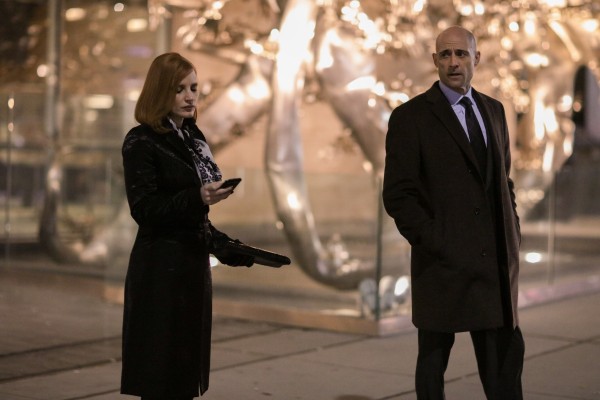 The best part is you don’t even like her but you are captivated by her win at all costs commitment. While she captures the viewer, there are so many other stellar performances to highlight. Allison Pill (The Newsroom) is a smaller but pivotal role. She does a wonderful job of yet again playing the overlooked girl who really knocks it out of the park. Mark Strong and John Lithgow give marvelous performances, Strong as Sloane’s boss at the non-profit and Lithgow as a corrupt US senator.

Gugu Mbatha-Raw plays Esme as part of Sloane’s team. The scenes between the two of them are gripping and enthralling to watch. Their relationship is the one that tears at you, eats you up and spits you out. Equally enjoyable to watch are Sam Waterson (‘Law and Order‘) and Jake Lacy (‘How to Be Single‘). Quite honestly, Lacy’s performance was just a delight to watch. He is the only character that relates to Sloane like she’s a human, and also he’s very handsome. 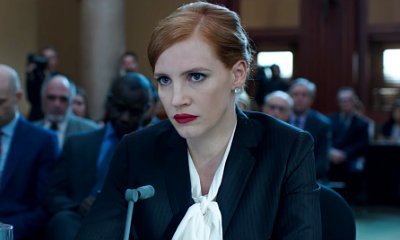 ‘Miss Sloane‘ is enjoyable if you can suspend belief and pretend that this underdog, right is right world that Sloane is fighting for prevails in real life.  This has been a weird, backwards, roller-coaster year in the world of politics. In a time when many feel the Washington elite are moving in the wrong direction this movie could be something to stand up and cheer for… but then you realize, that most likely the backstage bribes, the discord and the win at all cost attitude is really what prevails in our society and you wish that there was a, no pun intended, trump card to be played. Until then, go to the movies.