Film Review: ‘Fantastic Beasts and Where to Find Them’!

Grab your wands, spell books, wizards and witches, because the world of ‘Harry Potter‘ is back for the long haul with J.K. Rowlings‘ book ‘Fantastic Beasts and Where to find Them‘. This film is the first in a set of five upcoming movies and begins with a good amount of character introductions, but not necessarily origin stories. Instead of taking place in a somewhat modern day London or even that of the magical place of Hogwarts, ‘Fantastic Beasts‘ takes place in the 1930s in New York, which is around the same time that King Kong would have been climbing buildings. So before Harry Potter himself was even born, this whole fantastic tale took place, which follows a young man named Newt Scamander (Eddie Redmayne) who travels from England to the USA to release a beast of a bird in Arizona to be free. Scamander is a bumbling and clumsy young man, so it’s easy to see how and why he would lose his literal briefcase full of beasts out on New York, which is the main stage and story for the film.

Meanwhile, there is an evil wizard named Gellert Grindewald who is on the loose and is one of the most dangerous and most evil wizards there ever was, along with a U.S. group that hates all wizards and witches that tries to take out Scamander and other wizards and witches. Scamander has some help on his quest with two sisters named Tina and Queenie Goldstein, who work for the U.S.A.’s version of the Ministry of Magic called the Magical Congress of the United States of America, which is mostly led by a sinister yet conflicted man named Percival Graves (Colin Farrell), who has taken to an abused young boy named Credence (Ezra Miller). Filmmaker David Yates is back in the director’s chair again, as he will be for all five films. 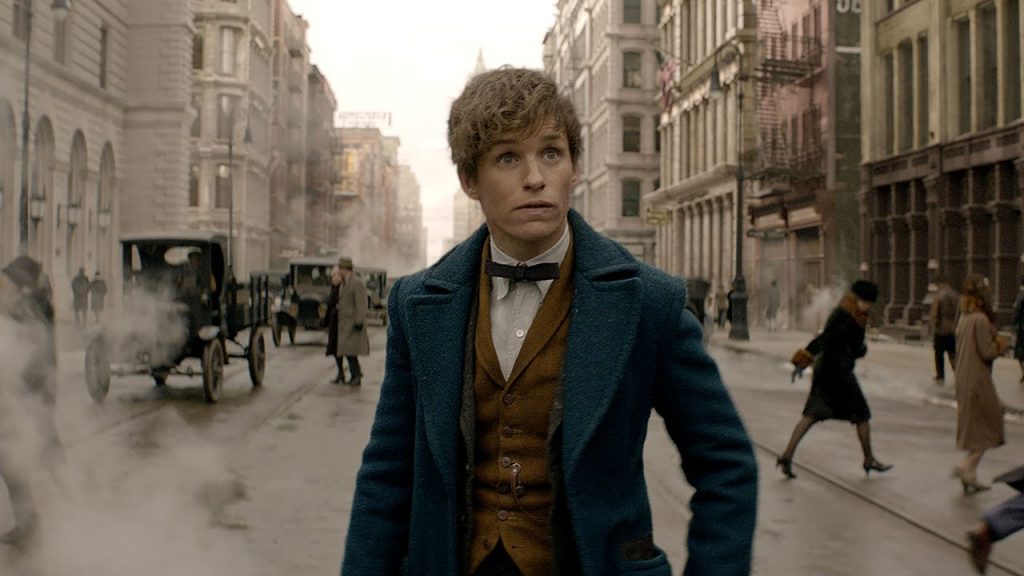 Yates knows the world of ‘Harry Potter‘ very well, as he directed the last four ‘Harry Potter‘ films, and leaves the kid jokes at the curb. ‘Fantastic Beasts‘ is a very dark and sinister film, although it is filled with wonder and amazing creatures. What Yates and Rowling do well is fully immerse you into the magical world of wizards again, with different spells, fun buildings and creatures, and hints of bigger back stories that are not fully told yet. This setup of a film introduces us to some great characters and plot points that will be the focus of future films without giving much away here, which was a nice touch. There are some mentions of a few characters from the ‘Harry Potter‘ films, but again, ‘Fantastic Beasts‘ stands on its own and is fairly easy to separate the other movies from this.

The world here is bleak and full of adult themes, leaving the funny kid jokes on the back burner, which I admit, I miss here, but the new comic relief comes from Dan Fogler as Jacob Kowalski, who is a muggle whose dream is to open up a bakery. By just being in the wrong place at the wrong time, he is tangled up with Newt and this world of magic, and he steals every scene he is in. I really hope they bring him back for future films in a big way. ‘Fantastic Beasts‘ is a great start to a new ‘Harry Potter‘ franchise, despite the bleakness throughout the film.