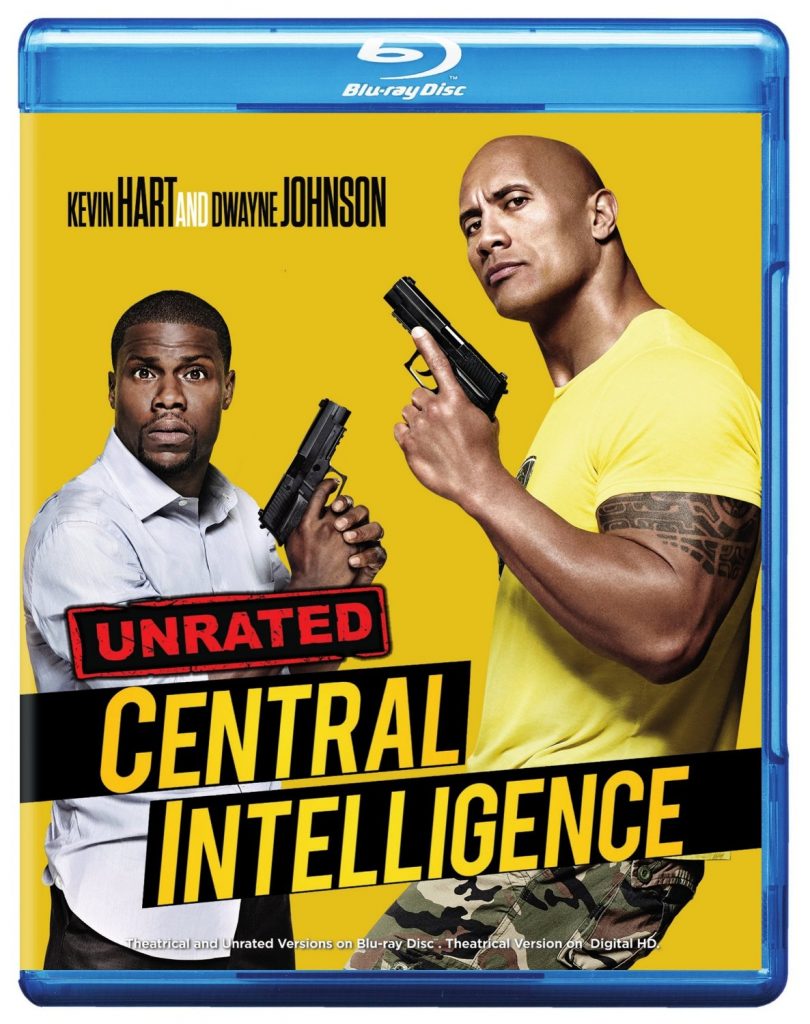 What would a Summer-Movie-Season be without Kevin Hart and Dwayne ‘The Rock’ Johnson? This summer, the two team up in an action-comedy called ‘Central Intelligence‘, directed by Rawson Marshall Thurber (‘Dodgeball‘ and ‘We’re The Millers‘) and co-written by actor/writer Ike Barinholtz(‘Neighbors‘). With so many buddy-cop action comedies out there, it’s sometimes difficult to tell one of them from another. Sure, there are the greats like ‘Lethal Weapon‘, ‘Turner and Hooch‘, and ‘Tango and Cash‘, but what does modern day buddy-cop action comedies hold that the past films don’t? When relating this to ‘Central Intelligence‘, it seems like the filmmakers thought it would be a lot of fun to put these two personalities together and basically let them riff off each other for a couple of hours. Throw in a some guns and a half baked plot about world security and terror, along with a message about being bullied, and you have yourself ‘Central Intelligence‘.

This film doesn’t really pay attention to much with the actual plot at hand here, but more or less has Hart and ‘The Rock‘ running around in comical scenes with some action to move the so-called story along. I know that doesn’t sound great, but the chemistry and comedy between these two is quite funny and charming all at the same time. It’s this only aspect that makes the film watchable and thoroughly enjoyable. You’ve seen better action scenes before in other films and you’ve laughed harder elsewhere too, but when these two actors come together, they make for a hilarious duo. I wouldn’t be surprised if there is a sequel to this at some point.

The film starts out back in the mid-90s where Calvin Joyner (Hart) and Bob Stone (The Rock) are in high school. Calvin is the star of the school and is involved in everything from sports to theatre and is most likely to succeed. Bob Stone is a fat kid with braces who loves John Hughes and sings in the public high school shower. After a major embarrassing incident in the middle of the whole school, Bob is truly defeated and Calvin is the only one who helps. Cut to present day where Calvin is unhappy with his mediocre accounting job and Bob Stone is now ‘The Rock‘.

Sooner than later, bad guys and even the CIA are gunning for Bob Stone and Calvin now, and you never know if Bob Stone is an enemy of the state or the good guy, but none of this really matters here, as an excellent field of cameos pop up and the jokes between The Rock and Hart are almost endless, with the exception of when Calvin is trying to decide if his old friend is trustworthy. Again, ‘Central Intelligence‘ isn’t the ultimate buddy-cop action comedy, but it certainly has its moments. There are a ton of movie references, some solid comedy, and ‘The Rock‘ wearing a unicorn T-Shirt. You just can’t get enough of that silly fun. Stay tuned during the credits for outtakes. 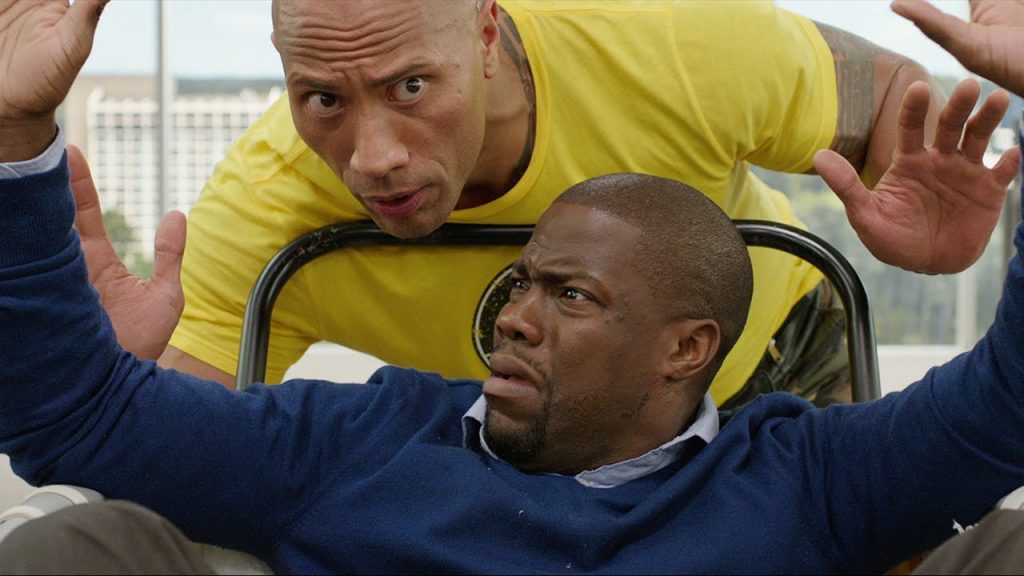 ‘Central Intelligence‘ comes with a 1080p HD transfer and is presented in 2.40:1 aspect ratio. The detail is very sharp and vivid throughout in this digitally shot feature. Closeups reveal all of the beads of sweat and blood on the actor’s faces as well as some of the individual hairs in Kevin Hart’s beard. The stitching in The Rock’s hilarious T-shirts can be seen easily as well. Wider shots never go soft either, showing all of the background items and city buildings with great detail. Colors simply pop off screen with bright primary colors throughout the film and are always well-saturated and realistic. Black levels are deep and inky and the skin tones are always natural. There were no instances of any major banding or aliasing, although there was some very slight video noise here and there, but it’s nothing to write home about.

This release comes with a great lossless DTS-HD MA 5.1 mix that fully immerses you in this funny and chaotic landscape. Sound effects are robust and loud throughout the film and pack a great punch whenever a gunshot blasts by or an explosion happens. Every kick, punch, and rock bottom have a good impact and will make you cringe and the bones that The Rock may have broke on those stuntmen. Ambient noises of other people chattering, city sounds, and other guns going off sound incredible with some good directionality. The score and music always add to the comedy and action of the film without drowning out any other aspect of sound. The highs and lows are excellent with the bass rumbling in the heavier action sequences. Dialogue is always crystal clear and easy to follow, and free of any pops, cracks, hiss, or high shrills, leaving this audio presentation with great marks. 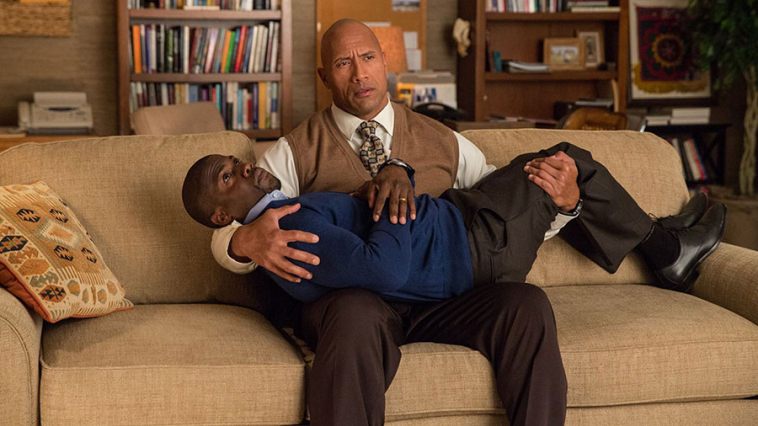 Pretty much all of these extras have the option to view in Rated or Unrated versions.

Audio Commentary – Director Rawson Marshall Thurber and editor Michael L. Sale deliver a stale commentary track with really no comedy in it all. It’s more on the technical side of things than fun anecdotes from the set. There should have been a Rock/Hart commentary track here.

Deleted Scenes (HD, 88 Mins.) – These extended, alternate and deleted scenes come in two batches. One batch has about 18 minutes for the theatrical version, whereas the unrated version has almost 70 minutes of alternate and extended moments full or cursing and vulgarity. I’m glad they added in these moments.

Gag Reel (HD, 6 Mins.) – Here we have missed cues, flubbed lines, laughter, dancing, mistakes, and even more laughter. This is fun to watch.

Line-O-Rama (HD, 3 Mins.) – Here is a montage of Kevin Hart and The Rock doing some improv on set.

Dance Off (HD, 2 Mins.) – This shows the actor who played the teenaged Robbie dancing for the role.

Couch Time Lapse (HD, 1 Min.) – This is a very quick look at how the filmmakers made the funny scene where The Rock spent the night at Hart’s house. 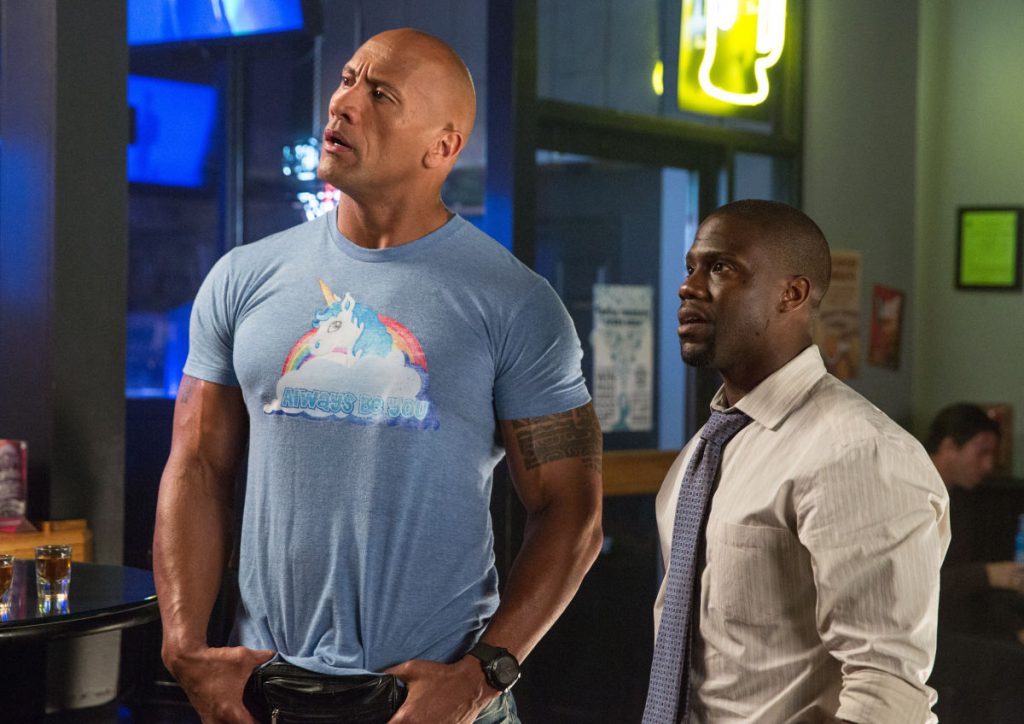 ‘Central Intelligence‘ was a fun-as-hell film that can make you laugh and give you fun thrills from start to finish. It also stars to of the most popular people in film right now, The Rock and Kevin Hart. There isn’t much to this movie and a lot of it is silly, but it’s good ole popcorn fun to enjoy with friends and family. It was a great summer film that didn’t have any superheroes in it. The video and audio were both great and the bonus features were decent, but fairly short. Still, this one comes Recommended!