‘War Dogs‘ looks good on paper and the trailer for the film sells the movie’s comedy and fun moments. It seemed like the perfect project for director Todd Phillips (‘The Hangover’ trilogy, ‘Road Trip’, ‘Old School’) as he reunites with Bradley Cooper and adds Jonah Hill and Miles Teller to this story, based on true events about two school friends who love to smoke up and run guns for the government – some of which might be illegal. This is a very different film for Phillips from what we’re used to, and unlike the trailer, the film isn’t all that funny. Sure, there are some moments of small laughter here and there, due to Jonah Hill’s character, but the rest is Phillips’ wink to a mix of gangster movies, including ‘Scarface’, ‘Goodfellas’, ‘Casino’, and even a bit of ‘Drive’.

That sounds good on paper, but the end result was lackluster with the 115 minute movie seeming like a three hour endeavor. The pacing is off and one scene just seems to be a repetition of the one before it. ‘War Dogs‘ tells the true story of Efraim Diveroli and David Packouz, who were high school friends, who eventually got a government contract to supply weapons to the U.S. Army in Afghanistan with no prior experience and being in their early 20s. This film of course has a bunch of fictionalized elements, which is good, but never has anything original or fresh. 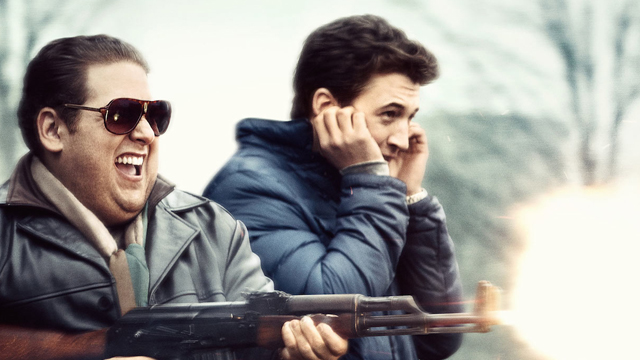 Perhaps the best scene of the film is in the trailer, where Diveroli (Jonah Hill) and Packouz (Miles Teller) are riding in the truck in the Iraq desert, being chased by people with guns. That scene was funny, action-packed, and highly entertaining. Unfortunately the rest of the film is fairly drab with some flashes of funny Jonah Hill moments. Phillips sure packed the film with winks and nods to the gangster movies I mentioned above with the same music, shots, and narration style that you see in Scorsese films. Plus, there are ‘Scarface’ posters everywhere in the film, along with references to the actual movie by name. I just got tiresome very fast.

It’s an interesting enough story to tell, but the characters aren’t that redeeming nor are they that likable throughout, particularly Jonah Hill’s character, who he plays the part perfectly. Teller is also great, but isn’t given much to work with. Bradley Cooper shows up for a few seconds here and there, but again, isn’t given much time to really explore his character, who turns out to be the most interesting part of the movie. ‘War Dogs‘ looks good from a technical and visual standpoint, but there really isn’t anything underneath that veil.