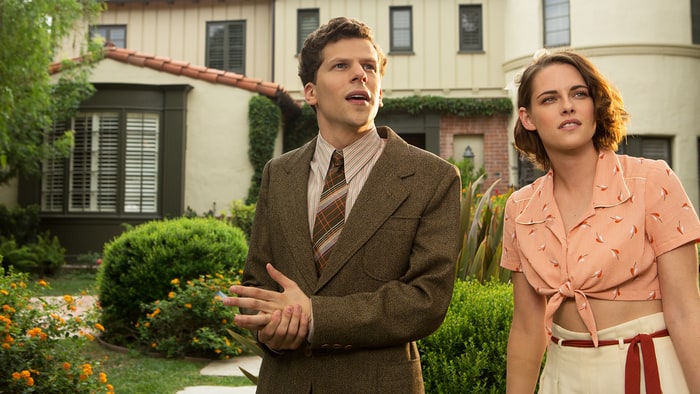 Even at the age of 80, the iconic and prolific filmmaker Woody Allen has not lost his wit, charm, or ability to churn out film after film every year. With a little bit of ‘Annie Hall‘ and ‘Manhattan‘ mixed in the frying pan, Allen brings this 1930’s Hollywood story come to life, titled ‘Cafe Society‘. It’s been a while since Allen has made Los Angeles the backdrop for one of his films,and this sweet, funny, romantic film really hits all of those famous Woody Allen notes that we’ve come to expect over the years. It might not be the most original story, but when Woody Allen does these neurotic love stories, the characters, dialogue, and plot all come together in a cohesive and very funny manner. It’s what Allen does best, and he is back in full form with ‘Cafe Society‘.

Allen is also known for casting big name stars in these little films and this one is no different as Jesse Eisenberg, Kristen Stewart, and Steve Carell lead this amazing cast. The film follows Brooklyn native Bobby Dorfman (Eisenberg, or a would-be Woody Allen in his younger years), as he shows up in 1930’s Hollywood in hopes of getting a job with his movie studio agent, Uncle Phil (Carell), who gives Dorfman a job of running errands. Phil name drops all of the actors and actresses he schmoozes with and is a master of his domain, although he is secretly having an affair with one of his secretaries Vonnie (Stewart), even though Phil seems happily married already. Phil enlists the help of Vonnie to show his new nephew Bobby around Hollywood and the two young adults fall for each other, which makes a weird family love triangle.

Soon enough Bobby moves back to New York in what seems like a joke from Woody Allen on how much he dislikes Hollywood, where Bobby takes on running the new fancy nightclub that his older gangster brother Ben (Corey Stoll) owns. In ‘Annie Hall’ fashion, the two lovers go their separate ways with different lives only to have their paths cross again down the road, brining up past feelings. It’s all funny and sweet, which is what Allen does best. Jesse Eisenberg plays Dorfman or a younger Woody Allen to a tee, hitting all of the neurotic one liners and notes that we’ve seen from Allen’s younger days. Even Eisenberg’s body language is spot on here. Kristen Stewart brings her charm to the screen in every scene and makes you wish she would be on more period piece films. Carell plays the super busy agent very well, and also has a softer side to him than he lets on to.

Dorfman and Ben’s jewish parents steal the show though and are so funny every time they are on screen, whether they are complaining about their son being a gangster or worse, dating a non-jew. The wardrobe for the time period is always great to see and executed well here and the filming is excellent with the right amount of glitz and glamour that was old Hollywood. Woody Allen has knocked it out of the park with ‘Cafe Society‘ and has quickly become one of my favorites in his long list of films.