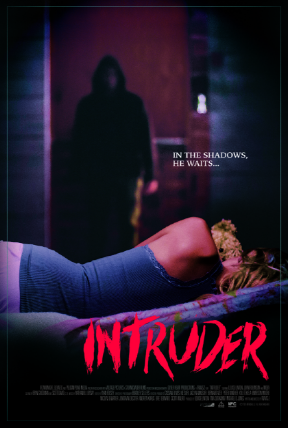 It has to be a lot of fun to mess with the mind of an audience in filmmaking. Intruder, like many home-related thrillers, leaves me looking over my shoulder as much as any of them. While I know that noise I just heard in the other room is my washer wrapping up it’s final cycle, my mind instead immediately races to “WHAT COULD I MACGYVER AS A WEAPON IN HERE!?” Now that I have a straightened out paper clip taped to the end of my remote, let’s continue.

This, ‘Intruder‘, is a weird one. Almost the entire film is a setup accented by loud, abrupt orchestral notes acting anytime the titled character makes a move inside the home our leading lady, Elizabeth. The anticipation never stops building, so much so that I really got tired of waiting and accustomed to it. By the time “the moment we’re waiting for” happens, my reaction was simply an “Welp, there it is.” I feel like a lot of the film was lost in that.

Elizabeth is a beautiful blonde and ambitious cellist haunted by none other than Moby, her militant cello instructor. (Think JK Simmons in ‘Whiplash’ crossed with Dean Pelton, played by Jim Rash, from ‘Community’.) Being that she and her boo, Justin, are on the outs, she’s alone in her home for much of the story. This gives the creeper plenty of time to do said creepin’. With that, the film is almost entirely a setup. Of course, the opening scene, as most thriller or horror flicks go, sets us up for what’s to come with a good ole lightning flash followed by death. Outside of that, anticipation builds throughout the entire movie, causing both annoyance and anxiety.  This is mostly caused by loud, abrupt musical notes played every two to three minutes as we see the intruder move from closet to hallway to bathroom to kitchen for a glass of milk (Yep!) to bedroom or simply just pulling a door closed.

Elizabeth is not too aware of her surroundings. Maybe it’s an instinct to protect my home or more so sleeping on the floor next to my sister’s bed after any scary movie we watched when I was growing up, but I’m fairly sure I look over my shoulder about every other second when walking around my house alone at night. She does not do this. If a shadow passes by her or the creeper walks by her see-through shower curtain, all she does is look around or yell, “Justin?”, before simply going back about her business. Nope. If I see a shadow or anything move, my paper-clipped remote becomes a live-action game of ‘Fruit Ninja’.

As she is sorting through her musician and relationship woes, Elizabeth meets John. He’s a bit of an over-interested guy with a clear fascination for our leading lady, and while is efforts are a little overbearing, he does have that nice guy next door appeal. He continues to appear throughout the film, trying to push the boundaries of the friend zone. Elizabeth is quick to remind him about Justin despite the trouble in paradise. That trouble is quickly extinguished when Justin comes home; they make up, as couples do, and Elizabeth’s world starts to settle down a bit until he leaves. Turmoil sets back in and our title character starts getting closer and closer to ole girl, even to the point of a revealing “Bless you.” after a sneeze. (Yep, that too.)

Like I said before, it has to be fun to write something that can keep someone on the edge of their seat. I respect what the director it trying to do and the creatives routes traveled to do so; however, some of those aforementioned boundaries are pushed a bit too far. In the end, I believe the ultimate goal of such a thriller is lost. Additionally, the film ends before it picks back up again for pseudo-thrilling encore, like a loud “Psyeeeeeeeeeke!” By this time, I’m further disinterested.  I wanted very much to enjoy a similar flick in that vein with this one; however, it misses the mark.