Dwayne Johnson Will Be ‘Doc Savage’ With Shane Black Directing!!!

When Dwayne Johnson announces a new project I pay attention, when that project involves one of my favorite writer/directors Shane Black, I give it my undivided attention. The pair have come together for Sony Pictures’ ‘Doc Savage‘. 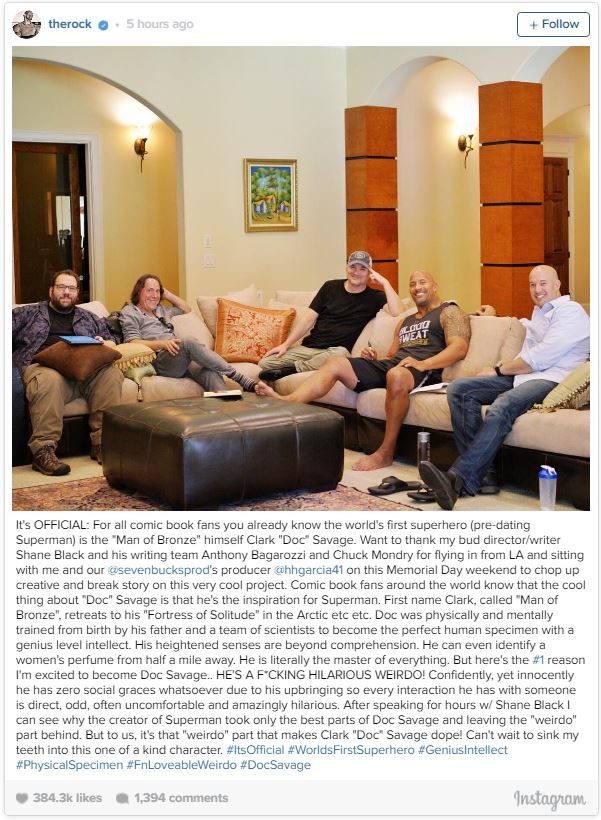 Shane Black is directing from a script he co-wrote with Anthony Bagarozzi (‘The Nice Guys‘)and Charles Mondry (‘Jekyll‘). Black is an amazing writer and responsible for the ‘Lethal Weapon‘ film series, ‘The Last Boy Scout‘, ‘Kiss Kiss Bang Bang‘ and ‘Iron Man 3‘. When Black was promoting ‘The Nice Guys‘ he stated the his pic for ‘Doc Savage‘ was Johnson and this morning Johnson made his involvement official.

In addition to starring, The Rock will also produce through his Seven Bucks Productions with Hiram Garcia. The two join an already attached production team of Neal H. Moritz, Ori Marmur and Michael Uslan.

Who better to tell you the details than Johnson, himself. This is what he posted this morning:

“It’s OFFICIAL: For all comic book fans you already know the world’s first superhero (pre-dating Superman) is the “Man of Bronze” himself Clark “Doc” Savage. Want to thank my bud director/writer Shane Black and his writing team Anthony Bagarozzi and Chuck Mondry for flying in from LA and sitting with me and our @sevenbucksprod‘s producer @hhgarcia41 on this Memorial Day weekend to chop up creative and break story on this very cool project. Comic book fans around the world know that the cool thing about “Doc” Savage is that he’s the inspiration for Superman. First name Clark, called “Man of Bronze”, retreats to his “Fortress of Solitude” in the Arctic etc etc. Doc was physically and mentally trained from birth by his father and a team of scientists to become the perfect human specimen with a genius level intellect. His heightened senses are beyond comprehension. He can even identify a women’s perfume from half a mile away. He is literally the master of everything. But here’s the #1 reason I’m excited to become Doc Savage.. HE’S A F*CKING HILARIOUS WEIRDO! Confidently, yet innocently he has zero social graces whatsoever due to his upbringing so every interaction he has with someone is direct, odd, often uncomfortable and amazingly hilarious. After speaking for hours w/ Shane Black I can see why the creator of Superman took only the best parts of Doc Savage and leaving the “weirdo” part behind. But to us, it’s that “weirdo” part that makes Clark “Doc” Savage dope! Can’t wait to sink my teeth into this one of a kind character.”

This is going to be awesome!!!