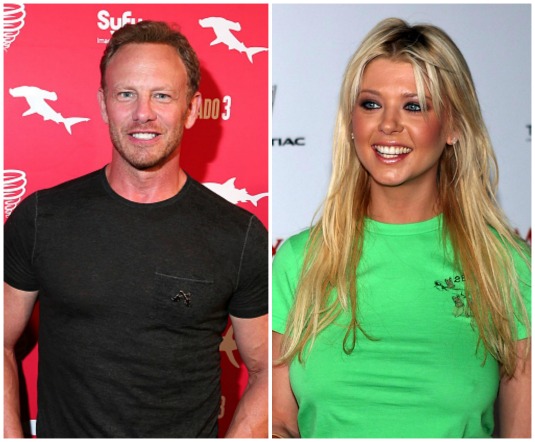 Syfy is at it again and has decided that three Sharknados is simply not enough! ‘Sharknado 4‘ is coming and with it the results from the end of the third installment, ‘Sharknado 3: Oh Hell No!’. Remember in July when Syfy gave us the option of “You decide if #AprilLives or #AprilDies”? Of course they were referring to April Wexler (Tara Reid).

Reid will be back to let us know the outcome of the voting and Ian Ziering will return for another segment in July as Fin, April’s husband. This time the story moves forward five years after part three. The new bit will bring back David Hasselhoff and Claudia Shepard. Gary Busey is joining the party as Wilford Wexler, April’s father and a lead scientist with Astro-X. Tommy Davidson will be Aston Reynolds, a billionaire and CEO of  Astro-X, who are developing a revolutionary system that can stabilize the atmosphere and prevent the formation of tornadoes.

Cody Linley will appear as Matt, Fin and April’s oldest son. Matt joined the military and is now eager to reunite with his father. Imani Hakim is Gabrielle, Matt’s best friend and a fellow soldier, herself. She is tough, self-sufficient and will make no bones about her capabilities. Masiela Lusha is Gemini, Fin’s cousin. She’s bursting with shark-busting attitude and can’t wait to join the fight. Cheryl Tiegs is Raye, Fin’s mother, has a hippie past and steps up to the plate without fear when it’s time to say what she feels or stand up for her family.

Anthony C. Ferrante is the same director that brought us all previous installments of the ‘Sharknado‘ series and he’s returning to helm the fourth which is currently filming from a screenplay written by Thunder Levin, who, like Ferrante, was responsible for the screenplay on the others, as well.