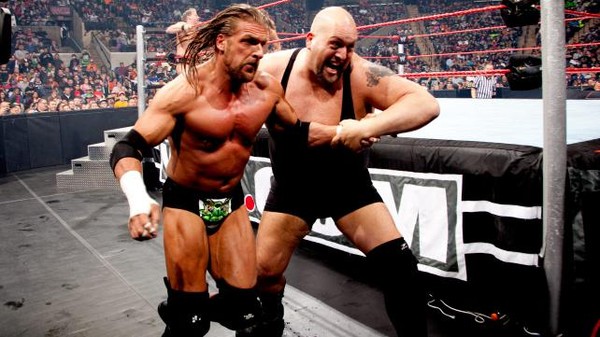 We are officially on the road to Wrestlemania 32. To kick off Wrestlemania Season, we will be rolling out a series of top-ten Wrestlemania moments over the next few weeks. As this is our first week, it’s only fitting that we begin with the top ten opening matches in Wrestlemania history.

Quick disclaimer: I won’t be ranking any of the Money in the Bank ladder matches here, as those constitute a separate list.

10. Allied Powers v. Blu Brothers (Wrestlemania XI) – So this one won’t appear on many top ten lists, which is a shame. The Allied Powers theme song was insanely good (https://www.youtube.com/watch?v=VtfSWMwTaVI) and the Blu Brothers ended up having a Forrest Gump-esque career as bit characters in a variety of major pro wrestling eras (they were Skull and 8-Ball during the WWF Attitude Era, the Harris Brothers during the latter stages of the nWo, and even spent some time in ECW and TNA). This match isn’t a technical masterpiece by any means, but it’s fun.

9. Edge v. Alberto Del Rio (Wrestlemania 27) – Not a great match, but it’s Edge’s final match and it’s one of the few passable matches on an otherwise deplorable Wrestlemania card.

8. Big Show v. John Cena (Wrestlemania XX) – John Cena enters Madison Square Garden wearing a giant chain and a Patrick Ewing Knicks throwback and cuts a (pretty bad) “freestyle” rap on the way to the ring…and the crowd goes wild. Yes, this match is a reminder that the ultra-smarks used to love John Cena. This is Cena’s Wrestlemania debut and the Big Show does everything he can to make him look good here. Bonus points to this one because Cena pumps up his Reebok Pumps before hitting the F-U on Big Show, and I always wanted a pair of Reebok Pumps.

5. The Rockers v. Haku and Barbarian (Wrestlemania VII) – The absolute peak of meaningless undercard Wrestlemania matches. The Rockers are one of the greatest tag teams of all-time; masters of a high-flying athletic style while still excelling as storytellers. Barbarian and Haku were emblematic of the late 80s-early 90s WWE style; legitimate tough guys with comically stereotypical characters and stunningly enhanced physiques. The match manages to play to both teams’ strengths and has the fun distinction of being Shawn Michaels’ first Wrestlemania win.

3. Rey Mysterio v. Eddie Guerrero (Wrestlemania 21) – This match was technically excellent, but takes on greater meaning in hindsight. Eddie and Rey were the tag team champions heading into Wrestlemania, and Eddie was haunted by the fact that he had gone from WWE Champion at Wrestlemania XX to tag team competitor just a year later. His own hubris then led him to challenge his own tag team partner to a one-on-one match. Rey beat Eddie clean in this one, and their feud escalated quickly – there was eventually a ladder match in which they competed for custody of Rey’s son.  This also turned out to be Eddie Guerrero’s last Wrestlemania, so it’s emotional for that reason as well.

2. Bret Hart v. Owen Hart (Wrestlemania X) – I know, I know. It’s blasphemy to not have this match as number one. For as great as the brother v. brother storyline was, and for as good as Bret and Owen’s performances were, this match had no stakes. Bret was set for a title match later in the night regardless of the outcome, so the Owen upset, while shocking, did not alter the course of the WWF. Great, great match – just not the best opener ever.