Imagine that the leaders of Wal-Mart suddenly snapped and created an invincible killing machine out of their famous smiling logo (not that far-fetched now that I think about it). Now imagine that same death machine decided to take a breather and teach students at a Japanese high school. If you were to film such an event, you’d have something similar to director Eiichirô Hasumi’s creation. The end result is a heartwarming tale of global destruction that’s fun for the whole family.

Assassination Classroom, based on a Japanese Manga by the same name, tells the tale of a nigh-invincible yellow alien who destroys the majority of our moon, and for an encore, threatens to annihilate the Earth. Luckily for the denizens of Earth, the lethal alien isn’t without a sense of honor or challenge. He gives humanity a year to find a way to kill him before they meet their fate. What’s more, he offers to teach and train the would-be assassins on how to best take him down. He starts working as a new teacher of a group of lower class high school delinquents, teaching them assassination skills, other academic subjects, and a bit about themselves in the process.

With a run time just shy of two hours, this film feels longer than it actually is. This is a problem with the story and pacing more than anything else. The novelty of the film’s concept begins to feel stale as no new subplots or ideas are presented beyond the occasional introduction of a new “transfer student” into the classroom. There is enough here to make for an enjoyable flick, but so much of it leaves viewers with an “alright, we get it, just get on with it” mentality. Shaving about 20-30 minutes out of the film would do wonders to keep the pacing fresh and the story constantly engaging. Not only that, but the alien’s backstory (which was promised to us in the film by the alien himself) is never truly developed or revealed to any great extent. He just seems to exist and do what he does with no clear motive or reason aside from something very basic. 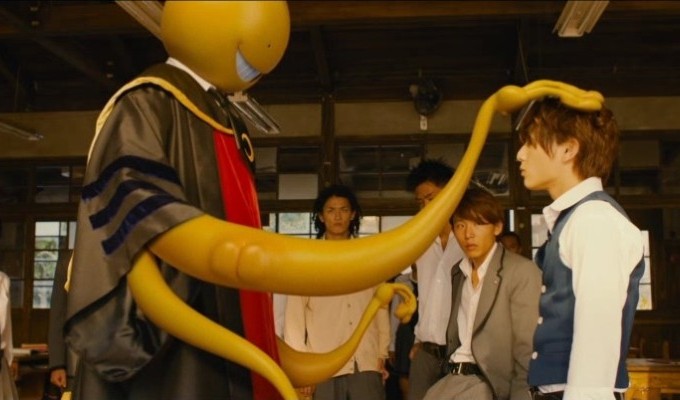 The other major problem with this film is the lack of notable characters. Aside from the CGI-infused super-powered alien, there are no real standouts in this film. The vast majority of the students are completely forgettable and replaceable. Even the teachers don’t seem to make much of an impact. Only the main antagonist and the “transfer students” make any sort of impression. The film’s greatest moment comes 35 minutes in with the introduction of transfer student Itona. Yet, even that is rather short lived and under-developed.

Still, the CGI is rather impressive as you are able to easily escape reality and immerse yourself into a world where an alien’s thirst for violence is only matched by his thirst to impart wisdom and knowledge on the young of his victims. His zangy behavior and impressive skills are displayed admirably on the screen. After a while he really feels like a living, breathing member of the cast, a feat not accomplished since Gollum in The Lord of the Rings.

Perhaps the most remarkable feat achieved by this film is its ability to transform the lead antagonist into the lead protagonist by the film’s finale. Amidst all the fighting and combat training, lies a story about the human spirit and friendship. You will find yourself actually caring for the health and safety of the alien as the students continuously up the ante in their efforts to save the planet. Under the tutelage of this bizarre alien, the students learn valuable life lessons, if only they can survive long enough to use them!